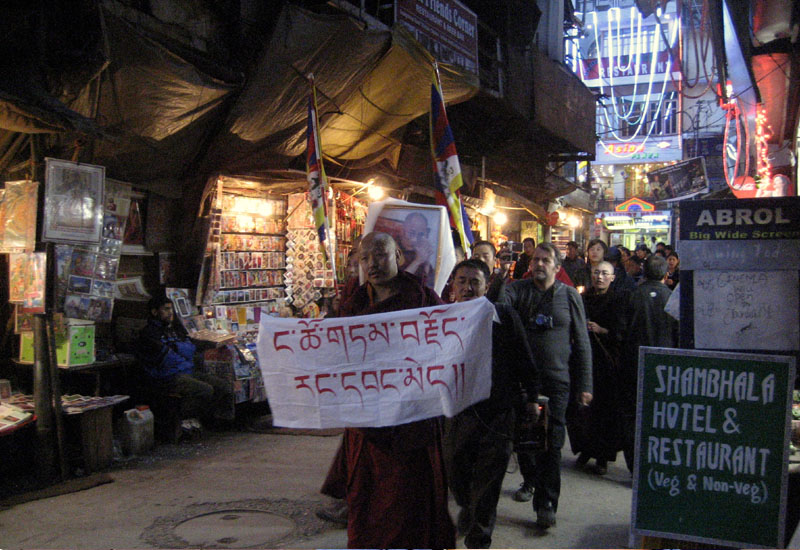 Dharamshala: - Approximately 200 people on April 6 held a candlelight vigil at the main Tibetan Temple in Dharamshala to pay their homage to the late Jamyang Jinpa, a 37 year old monk of Labrang Monastery, eastern Tibet. Jamyang Jinpa died April 3, presumably as a tragic result of prison and police brutality after his detention on April 9 2008.

After a protest march around the streets of McLeod Ganj, lead by monks carrying the picture of His Holiness the Dalai Lama, the Tibetan flag and a banner reading "we have no freedom of speech", the candlelight bearing attendees gathered at the main Tibetan Temple where a series of speeches were made.

Mr Lhukhar Jam, Vice-President of the organisation for former Tibetan political political prisoners, the Gu-Chu-Sum movement of Tibet, who explained the facts pertaining to Jamyang Jinpa's recent death as well as proposing a one minute silence which was duly observed by the listeners, many of whom were visibly touched.

Vice-President of the Tibetan Youth Congress, Dhondup Lhadar Pochungtsang, in a booming voice condemned China's violation of the basic human rights and pointed out that in the last 21 days, Chinese authorities are responsible for 3 deaths and that in the last 22 days, prior to his speech, they also have arrested 14 people in Tibet.

During the speeches, a series of pictures were shown from the protest staged by Jamyang Jinpa and a group of 14 monks in front of a state-organized media tour of about 20 foreign and Chinese journalists. Also included were pictures of some of the monks after being beaten very badly by Chinese police forces. 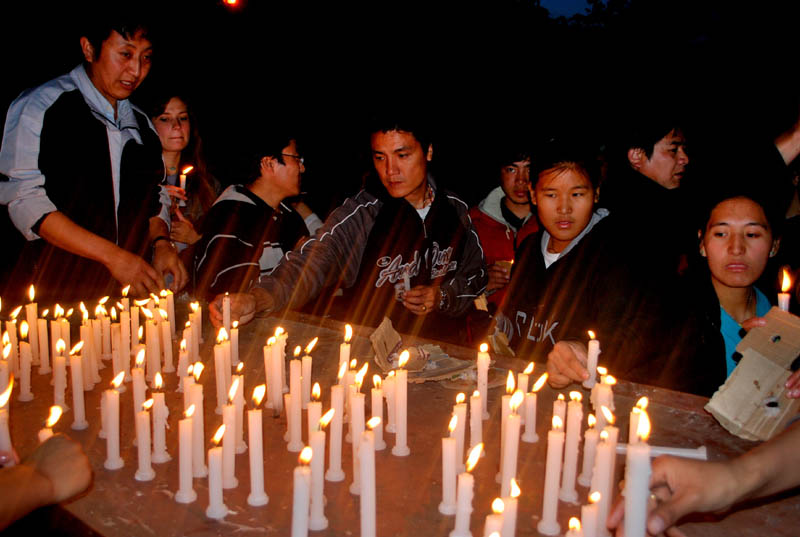 As the third speaker, providing information for the roughly 1/3 of the audience who didn't speak Tibetan, the President of the Tibetan women's association, Kirti Dolkar Lhamo, introduced and read from a statement endorsed by five Tibetan NGOs. "It is touching to see so many here tonight and also to see so many non-tibetans on this candlelight vigil" she began and continued; "Human Rights violation is taking place in its highest form (...) and our brothers and sisters inside Tibet are suffering every day," she added.

Ms Dolkar then went on to explain about Jamyang Jinpa's ordeal: "During detention, the police continued to beat and torture him so severely that by the time he was handed over to his family members after approximately 10 days, he was physically and mentally impaired and in an extremely critical condition", she relayed, and, obviously moved by the content of her speech, she went on; "He could not recognize his family members and had no memory of what had happened to him and lost partial vision. He had also lost complete sense in his legs and could not even stand," said Dolkar.

Jamyang's death comes as the latest of four consecutive cases in the space of two months, the others being; Sangay Gyatso, one of the 2008 protest's front runners who died February 26 after living in hiding for more than a year, Phuntsok Jarutsang, the 20 year old monk who self-immolated on the 3rd anniversary of the March 2008 protest and 59 year old Bulug who died March 25 due to his injuries inflicted by prison authorities while serving a 5 year prison term in Powo Tramo region of Tibet.

Concluding the statement, Dolkar read out: "If peaceful protests and non-violent struggle still has a place in this world, then the governments and international agencies, human rights bodies must stand up for Tibet, protect the lives of the Tibetan people and thereby resolve the long standing injustices being inflicted on Tibet and its people for the last 52 years."

Addressing the crowd in a more personal fashion, she finished her speech by saying: "The people inside and outside Tibet has not lost hope, and today's candle-vigil, and the candle in our hands, signify our hope and spirit that freedom will be restored inside Tibet. Victory to Tibet!" she further added.

The five NGO's behind the statement were; The Tibetan Youth Congress, Tibetan Women's Association, Gu-Chu-Sum movement of Tibet, Students for a Free Tibet and the National Democratic Party of Tibet.