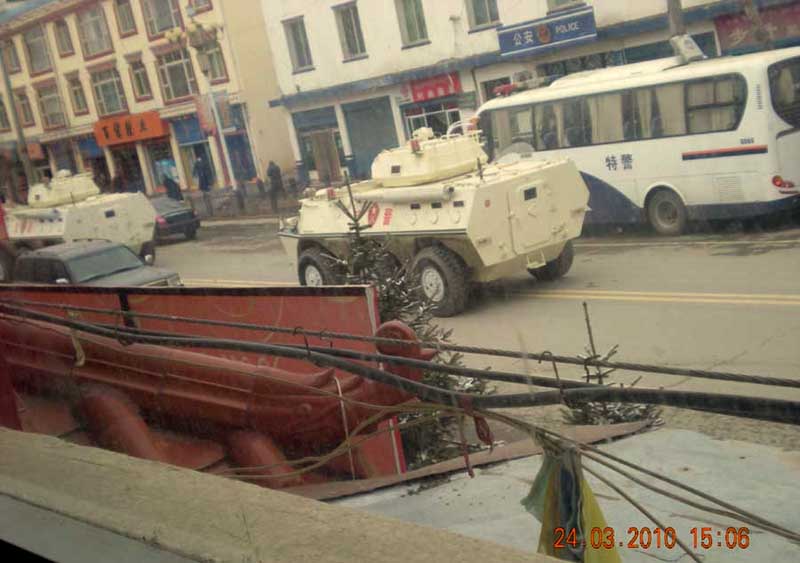 Dharamshala: - The five major Tibetan NGOs in exile on April 14th, have condemned China use of armed military forces against peaceful Buddhist monks and calling on the international community to speak out against China's current crackdowns inside Tibet. "The Chinese authorities have now imposed a severe lockdown on the monastery, armed guards are patrolling the entrance, and the back of the monastery has been enclosed within cement walls built to imprison the monks inside."

Since the self-immolation of a 20-year old monk Phuntsok at Kirti Monastery on March 16, 2011 the situation in Ngaba, eastern Tibet (Ch: Aba, Qinghai Province) has been extremely tense. Food supplies have been cut off, prompting widespread fears that the monastery will face a food crisis in the coming days. There are approximately 2,500 monks trapped inside the monastery. The NGOs are Tibetan Youth Congress, Tibetan Women's Association, National Democratic Party of Tibet, GuChuSum movement of Tibet, and Students for a Free Tibet-India.

In recent weeks, the Chinese government has violently restricted religious activities at Kirti Monastery and has launched a vigorous ‘Patriotic Re-Education Campaign'. The Monastery - a sanctuary for the practice of Buddhism and teachings of peace - has been effectively converted into an enormous prison. Dozens of monks have been arrested and taken from the monastery and their whereabouts remain unknown.

"As a former political prisoner, I have personally experienced the kind of torture inflicted on Tibetans in Chinese prison. The Kirti monks are innocent and are under attack for simply expressing their internationally recognized right to freedom of religion," said Lukar Jam, Vice President of GuChuSum (former Political Prisoner's Movement of Tibet). "We are gravely concerned about the situation in Ngaba and call for the immediate release of all those arbitrarily detained in recent weeks."

According to reliable sources in Ngaba, residents learned on the evening of April 11, 2011 that Chinese authorities were planning to forcibly remove all monks between the ages of 18 and 40 from the monastery. The monks were to be transferred to local prisons where they would be subjected to China's repressive political "reeducation".

Local Tibetans immediately gathered at the monastery to block the entrance. The armed police and soldiers tried to break through the crowd by beating the Tibetans and setting police dogs on them. In spite of the violent attacks, the Tibetans stood their ground and the troops failed to enter the monastery's inner gates.

"The United Nations and world governments must intervene in the name of human rights and pressure the Chinese government to put an end to its violent attacks and intimidation tactics in Ngaba," said Tsewang Rigzin, President of Tibetan Youth Congress on behalf of the 5 NGOs. "We urge the global community to express outrage and to take immediate action to protect the lives of innocent Tibetans."

The barbaric acts being carried out by Chinese authorities in Ngaba are reminiscent of the destruction and severe repression inflicted on Tibetans by Chinese troops after the invasion of Tibet in 1949 and during the Cultural Revolution.

Since 1959, the Chinese government has continued to destroy Tibetan monasteries. brutalizing and torturing Tibetan monks and nuns. 50 years of Chinese rule, however, has not destroyed the Tibetan people's spirit but instead has served to further fuel the resistance movement throughout Tibet.

On March 16th, 2008, during the peaceful uprising in Ngaba, protesters were brutally suppressed by Chinese troops and at least 10 Tibetans were killed. It was on the 3rd anniversary of this incident that Phuntsok self-immolated himself in protest against Chinese rule in Tibet.

In recent weeks, two other Tibetans - 59-year old Bulug and a 37-year old monk named Jamyang, died as a result of injuries sustained in police detention following their involvement in peaceful protests in 2008.