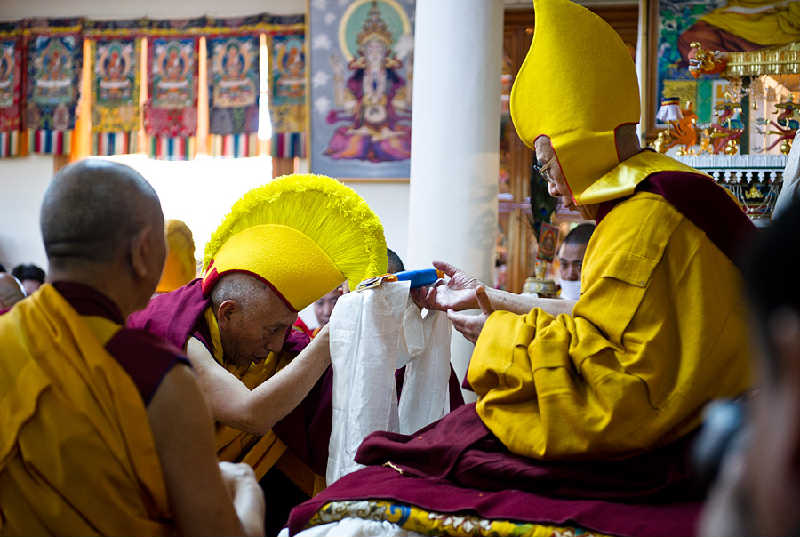 Dharamshala: - The Central Tibetan Administration today organised a grand long life prayer ceremony, beseeching His Holiness the Dalai Lama to live long and pledging to work with greater dedication and sincerity to fulfill his visions.

Kalon Tripa Prof Samdhong Rinpoche was the master of ceremony at Tenshug, which was attended by the entire staff of the administration.

In his brief address, His Holiness the Dalai Lama called on the Tibetan civil servants to wholeheartedly dedicate their service for the public welfare with utmost integrity and greater efforts.

His Holiness said the administration has made no failures in the past ten years and it would continue to progress in the future despite the fact the he is in a semi-retired position.

Explaining about his decision on the devolution of formal authority, His Holiness reiterated that he had taken the decision not out of giving up or losing hope for Tibet's struggle but for the long-term benefit of the Tibetan people. His Holiness said his decision which aims to further democratise the Tibetan society is being commended by the international community. He told the staff members to try to explain this to Tibetan people living inside Tibet whenever opportunity arises.

His Holiness reiterated that the Middle-Way Approach is the best and mutually beneficial solution to resolve the issue of Tibet, which has earned strong support from the international community including the Chinese people.

The staff members of the Central Tibetan Administration have pledged to His Holiness that they would put their best efforts in studying, encouraging and fulfilling His Holiness the Dalai Lama's commitments to promote human values, religious harmony, non-violence and the Middle-Way policy to resolve the issue of Tibet.

They promised to work with utmost honesty, truth, loyalty, justice, equality and to abstain from immorality and corruption.

The staff members offered sincere apology for their inability to work in accordance with the profound visions of His Holiness the Dalai Lama.