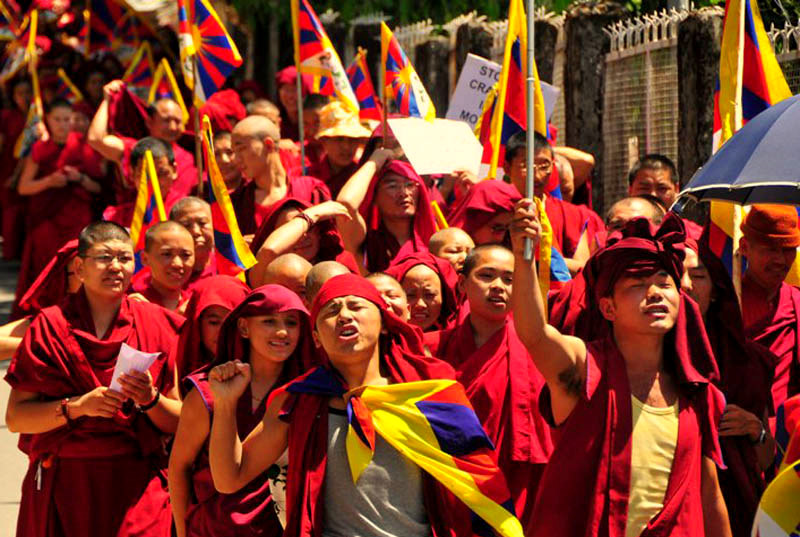 Dharamshala, April 24: In the aftermath of the deepening crackdown in Kirti Monastery and the ensuing arrest of hundreds of monks, the Tibetan Women's Association and Gu Chu Sum Movement of Tibet organized a mass protest rally in Dharamsala Sunday to condemn the ongoing crackdown in Tibet. Hundreds of Tibetans; monks, nuns, school children and lay people along with Tibetan supporters marched from Tsuglakhang temple in Mcleod Ganj to Kachari Square in Lower Dharamshala demanding global vigilance and arbitration over the heightened Chinese repression in Amdo Ngaba.

On Thursday (April 21) two elderly Tibetans, Dongko (male, aged 60) and Sherkyi (female, aged 65) were killed after enduring excessive beatings from the Chinese police. The two people died in their attempt to prevent the three hundred Kirti monks from forcibly being hauled into the trucks driving them to an undisclosed location. Eyewitnesses claim that "people had their arms and legs broken, one old woman had her leg broken in three places, and cloth was stuffed in their mouths to stifle their screams."

On Wednesday (April 20), several hundred officials from nearby counties gathered at Kirti Monastery to conduct ‘patriotic education'. According to International Campaign for Tibet, "in scenes that appear to be reminiscent of the Cultural Revolution, when monks gave answers that the officials did not approve of, the monks were severely beaten."

Since the last many weeks, Kirti Monastery has been turned into a virtual prison with foods being impounded, movements restricted and the 2500 monks being made to starve. According to Kirti Rinpoche living in exile India, "the Chinese authorities have concrete plans to debase the monastery and make livelihood difficult for the inhabitants of the monastery." Kirti Rinpoche has appealed for international support to save Kirti monastery in the wake of the crisis facing the monks and the local people in Ngaba.

"The brutal clampdown on the monks of Kirti Monastery in particular and the Tibetan people in Tibet in general are deplorable and intolerable" said Dolkar Lhamo Kirti, President of Tibetan Women's Association.

Contrary to the Chinese government's claim that the condition in Amdo Ngaba is normal, the video footages and the still images that came out of Tibet showed that following the unrest, Ngaba has been under severe lockdown with heavy presence of paramilitary and armed forces.

Tension is rife in the region with foreign journalists being barred from entering the restive region and with the phone and information communication channels also being blocked. The absence of international intervention and lack of adequate legal protection and free media coverage will only exacerbate the situation.

We urge the United States Government to raise this crucial issue during the annual meeting on human rights between the United States and China scheduled to be held next week in Beijing. We call for the urgent intervention of the United Nations Commission on Human Rights, the United Nations Special Rapporteur on freedom of religion, International Human Rights organizations, the Global Buddhist Associations and the world leaders to pressurize the Chinese government to immediately stop the crackdown, end the siege in Ngaba and to release the arrested monks of Kirti monastery.