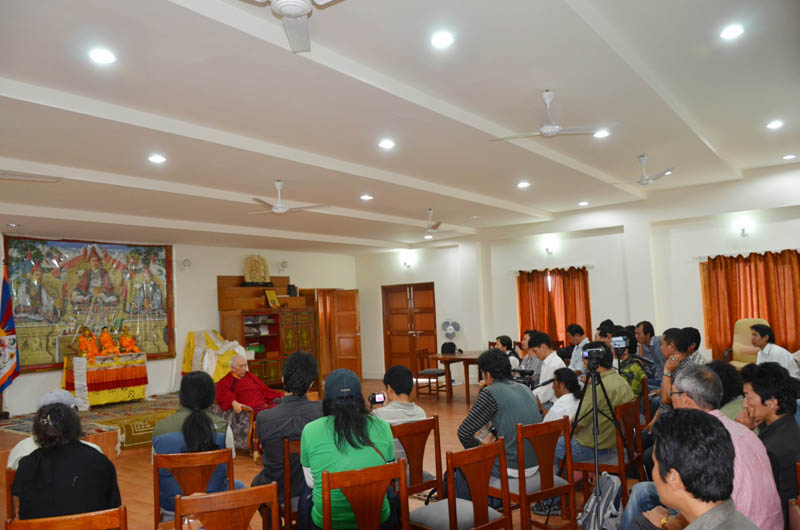 He drew on his experiences at Varanasi University, where he worked for 30 years before his 10 years as Kalon Tripa, to make his point. He said that during his 30 years at the university, "nothing had as big a result as the plans I had in my mind."

At the same time, Kalon Tripa said, "I also have nothing I regret about my work, because before I became Kalon Tripa, I had the idea that nothing becomes complete like we wish...we try and do our work to the best of our ability."

Kalon Tripa also spoke about the changes that the Tibetan Administration's economic policy has undergone during his work there.

"When I first started, I didn't know much about these very critical issues," he said.

With the help of an economic research group, the Tibetan Administration focused on the economy during the Kashag's 12th and 13th terms. They were therefore able to return millions of borrowed rupees to individuals in the private sector.

"The money we have is now clean and legal. There is no black money," said Kalon Tripa. The Tibetan Administration now runs off of interest and token financial contributions (Tibetan: chatrel) from the Tibetan community.

In response to another question about the role of Tibetan journalists, Kalon Tripa said that when he came to Tibet in 1959 there were no Tibetans working as journalists. "Later, society progressed and now we have enough media. This is a very bright result," he said.

Kalon Tripa spoke optimistically about the future of Tibet. He said that a solution to the Tibetan issue has definitely become closer due to changes in China, internationally and within Tibet.