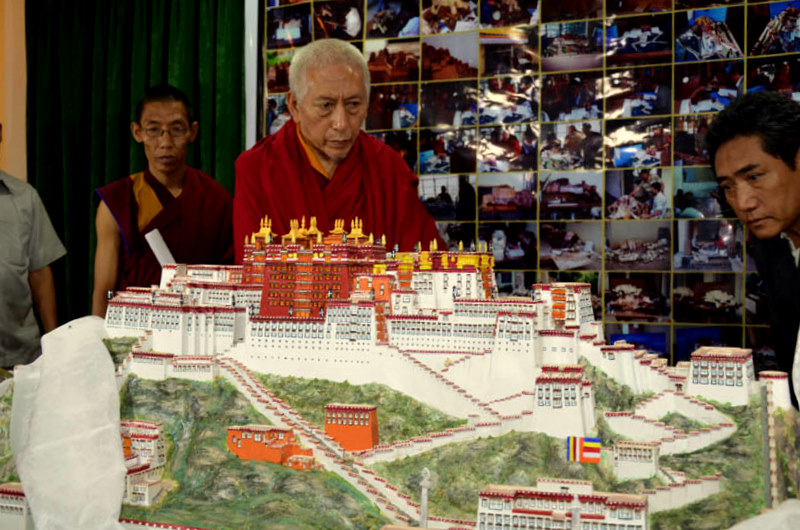 Dharamshala: - On 3 August, in the New Hall of the Tibetan Library, three models of the Potala Palace were released by Kalon Tripa Samdhong Rinpoche. Lodi Sangpo, a Tibetan artist from New Delhi, managed the construction of the three-dimensional models, which are each 25 kg and made from white cedar wood and mud. Sangpo will offer one model to His Holiness the Dalai Lama, one to Namgyal Monastery, and one to the Kashag, the cabinet of Central Tibetan Administration.

Construction began in 2005; at that time, Sangpo consulted Kalon Tripa Professor Samdhong Rinpoche, the Chairman, Vice Chairman, and Deputy Speaker of the Tibetan Parliament, His Holiness the Gyalwa Karmapa, and Sakya Gongma Rinpoche. He also presented the plan to His Holiness the Dalai Lama.

Sangpo said that he made the model because over the past 50 years Tibetans have become dispersed around the world.

"They live in different cultures with different customs, so after one or two generations, young Tibetans don't have much of a chance to get educated in Tibetan traditions. So this model is for future Tibetans. When they see this model, they will be reminded of their culture and their identity," he said.

More models will be made and sold. They will not be sold for a profit; the price will only cover the basic costs of construction, said Sangpo.

Kalon Tripa Sandhong Rinpoche said that while many images of the Potala existed, images made from wood and mud were much more rare. Kalon Tripa emphasized that this model accurately portrays what the Potala Palace looks like at this time.

Perched upon Marpo Ri ( Red Hill), 130 meters above the Lhasa valley, the Potala Palace rises a further 170 meters and is the greatest monumental structure in all of Tibet.

Early legends concerning the rocky hill tell of a sacred cave, considered to be the dwelling place of the Bodhisattva Chenresi (Avilokiteshvara), that was used as a meditation retreat by the great king, Songtsen Gampo in the seventh century AD. In 637 He built a palace on the hill.

The Potala Palace is an immense structure, its interior space being in excess of 130,000 square meters.

Fulfilling numerous functions, the Potala was first and foremost the residence of the Dalai Lama and his large government officials including ministers.

In addition, it was the seat of Gaden Phodrang Tibet government, where all ceremonies of state were held; it housed a school for religious training of monks and administrators; and it was one of Tibet's major pilgrimage destinations because of the tombs of past Dalai Lamas.