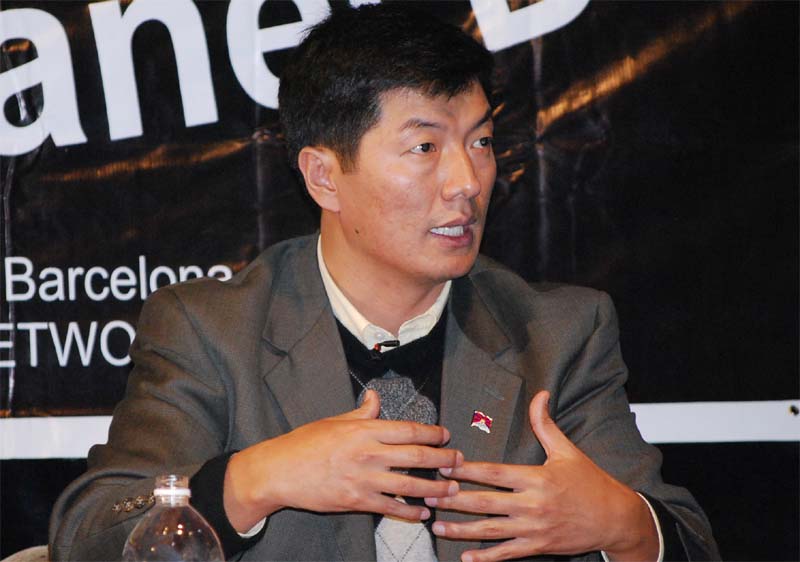 Dharamshala: Tomorrow, (Monday, 8th August) i take the oath to become the Kalon Tripa, or elected political leader, of the Tibetan people. I assume these duties with the support of His Holiness the Dalai Lama and a democratic mandate from Tibetans living in exile in 30 countries around the world. I will strive to restore freedom for Tibetans and the return of the Dalai Lama to Tibet. The values that i seek for Tibetans are those enjoyed and often taken for granted in India: freedom, equality, and dignity.

We are not against the Chinese people or China as a nation. We want to resolve the issue of Tibet peacefully through dialogue. But the Chinese people must know that historically Tibet and China were two different entities as enshrined in the Treaty of 821-822, which states that "Tibetan shall be happy in the land of Tibet and Chinese will be happy in the land of China."

When China invaded Tibet in 1959, it promised the Tibetan people a "socialist paradise." First roads were built and along these roads were carted Tibet's untapped and abundant mineral and other natural resources to China. Forests were logged. The countless priceless statues and cultural artifacts housed in destroyed monasteries and temples made their way to China. In short, the "socialist paradise" the Tibetans were promised turned into colonialism, with Tibet's resources being made to fuel China's development. The Tibetan people resisted this development with determination but the resistance was crushed with military might. This is the Tibetan experience of China's "socialist paradise."

After their escape from Tibet, my parents lived on an acre of land in a refugee settlement in Darjeeling. We were so poor that my folks had to sell one of their three cows to send me to the Tibetan refugee school financed by the Indian government. From there, i went to Delhi University and won a Fulbright Scholarship to Harvard Law School. Now, after 16 years at Harvard, i return to India to take up political leadership to help lead the six million Tibetans living in Tibet and exile.

We remain eternally grateful to the people and the government of India for giving us refuge for the past five decades. For those of us who live here, India is our second home. The Tibetan administration will uphold the special relationship between the Tibetans and Indians. We humbly appeal for your continued support and kind consideration to treat Tibet as one of the core issues between India and China.

After 60 years of misrule, Tibetans continue to be repressed. Any Tibetan caught with a picture of the Dalai Lama is arrested in his homeland. Monks and nuns are put through hard labour. Even to have a copy of the Universal Declaration of Human Rights could land you in trouble.

Ultimately, unable to accept the status of second-class citizens in their own country, in 2008, those born and brought up under the "socialist paradise," Tibetans from all walks of life rose up and protested from Dromo to Dartsedo and Ngari to Ngaba in Tibet. This generation of protesters in Tibet has not met the Dalai Lama; and though few in exile have been allowed to go to Tibet, our spirit is strong. Elders have entrusted their faith and leadership in the younger generation and i pledge to continue their legacy to make our freedom movement stronger and sustainable.

Following the footsteps of Mahatma Gandhi, the Dalai Lama advocates ahimsa, to which i subscribe too. The Dalai Lama has proposed a "middle-path solution" that seeks genuine autonomy for Tibet within China, which i support because i believe in the power of peaceful dialogue to enact change. I have spent the last 16 years cultivating dialogue between Chinese and Tibetan students, and arranging meetings between the Dalai Lama and Chinese scholars at Harvard University.

Although i will continue to ardently strive for Tibetan rights, meaningful progress will require the cooperation of other parties. Through peaceful dialogue and communication, i genuinely believe we have the opportunity to meaningfully create a solution that would satisfy both Tibetan and Chinese interests.

A just and speedy resolution of the issue of Tibet is in the interest of all Asia. For thousands of years, the Tibetan people served as responsible guardians of the environment of the world's highest and largest plateau that is the source of 10 major rivers, which contribute to the livelihood of more than two billion human beings. China's damming of rivers that originate from Tibet will undermine the livelihood of millions of people downstream in Asia. It is for this reason millions of people in Asia have a vested interest in seeing that the Tibetan people are restored to their traditional role of being the responsible guardians of the environment of the Tibetan Plateau. This transcends politics. It touches upon the well-being and welfare of Asia.