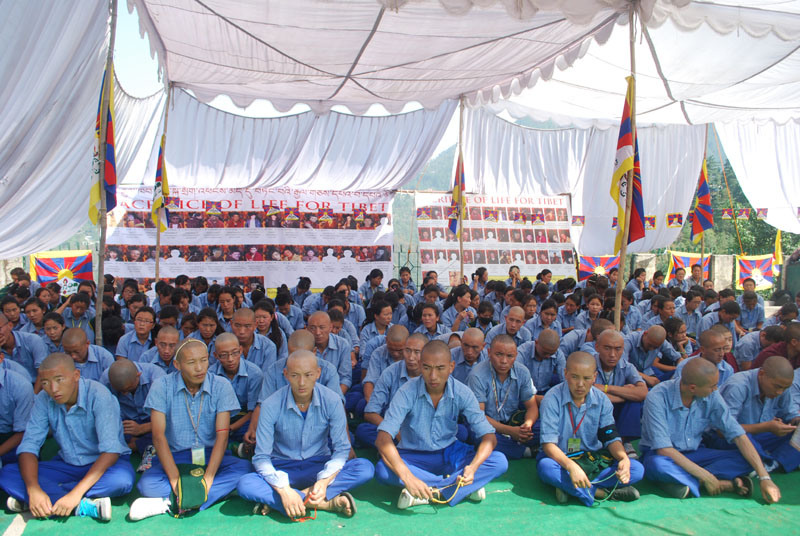 Dharamsala: Since 2009, The Tibetan movement has seen 38 cases of self immolation and 25 since January of this year. The escalation of the movement has resulted in many more peaceful tangential movements to bring awareness to the cause.

In the last week, Tibet has seen 3 cases of self immolation. There has seen a surge in public awareness about the movement.

Speaking at the Tibetan Children's Village (TCV) School in Suja, the Dalai Lama expressed his sadness with these events, but gave a lot of encouragement to the students who had organized the solidarity campaign.

After conclusion of the of the hunger strike and the painting exhibition on the 31st of May and the 2nd of June respectively, the campaign moves into it's final and perhaps most important day.

At 6pm on the 3rd of June, the same class 10 students who sat for the hunger strike will hold a candle light vigil from TCV School in Suja to the McLeod Gunj square and are planning to circle the town on its two main streets.

It aims to generate huge awareness as many are out on McLeod's street every Sunday. The students are hoping to attract a lot of support as His Holiness the Dalai Lama will hold a prayer after the candle light vigil.

A lot of time and energy has been invested by teachers and students alike who are showing a united front for the Tibetan cause.