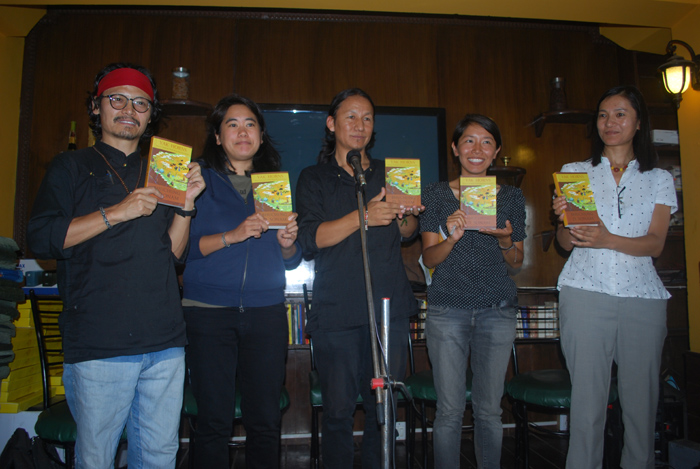 Bhuchung D. Sonam is a poet/writer born in Tibet. In exile, he studied at the Tibetan Children's Village School in Dharamshala. After graduating from St. Xavier's College, he received an MA from M. S. University of Baroda.

The guest of honour at the event was well known Tibetan historian Tashi Tserng. Also attending the event were other famous Tibetan writers and poets.

Author of "Dragon in the Land of Snow" Tsering Shakya, expresses that in Yak Horns "'Bhuchung D. Sonam articulates the voice of a new generation of Tibetans in exile - voiceless and stateless - longing for a space to call home. He eloquently describes the hopes and aspirations of young Tibetans. He is perhaps one of the very best spokespeople for the youth of his generation.'

The book published by Tibet Writes, brings together a collection of essays on contemporary Tibetan arts and social issues, expressed through the eyes of Bhuchung.

Bhuchung spoke about the reason behind publishing the book in English. He stated that there are many poets who write in Tibetan. However, their writings are not publicly known due to the lack of use of the language (outside Tibet) and thus their messages remain unheard. As a result Bhuchung decided to write in English as it is a universal language and his message would be understood by a larger audience and more people would come to know about the issues that Tibet has come to face.

At the launch of the book were Tibetan writer/poet Tsering Wangmo Dhompa, writer/poet Tenzin Dickyi, writer/blogger Dechen Pemba and activist/poet Tenzin Tsundue. All of the writers staged readings of their poems in English.

Bhuchung explained that at launches like these, there were generally two readings in Tibetan and two in English. However, this time there was a break from the usual as Tenzin Dickyi and Tsering Wangmo Dhompa were from the U.S.

Tibet Writes was launched in 2003 as a non - profit site dedicated to Tibet and Tibetan people. It is now also a publishing house, as well as a library of poems and articles for and by Tibetans.