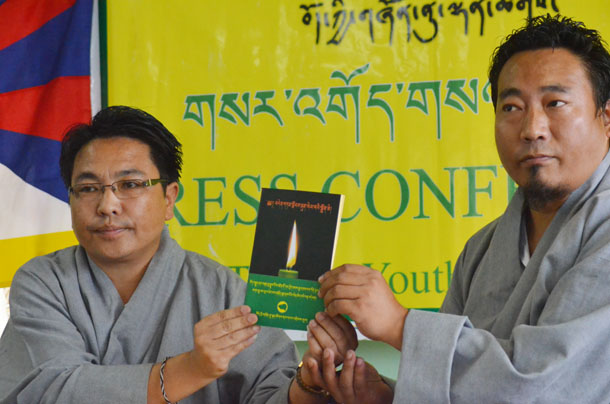 Dharamshala: - The largest NGO in exile, 'Tibetan Youth Congress' organized a press conference on Wednesday, July 18, at their Conference room. Mr. Dhondup Lhadhar, TYC Vice President presided over the press conference which was attend by a group of Tibetan journalists based in Dharamshala.

In 2007, the so called China’s State Administration of Religious Affairs announced a directive, Order No. 5. This was a law covering “the management measures for the reincarnation of living Buddhas in Tibetan Buddhism.” This law basically “prohibits” people like Buddhist monks from being reborn without communist government permission.

Since only state-sanctioned monasteries in China can apply for permission to reincarnate, the 2007 law effectively prohibits anyone outside China from “influencing” reincarnation-based leadership roles within China.

This new ruling came shortly after His Holiness the Dalai Lama stated that his successor to the role could, perhaps, be chosen democratically.

However, the question still remains; How can China, a Communist state committed to materialism and atheism, still control a decision that is based on religion?

"The Dalai Lama not only is attempting to bury long established historical tenets of Tibetan Buddhism with him when he dies, but is adding another criminal charge to his teachings of separatism, which damages Tibet and Buddhism," the Communist Party-backed People's Daily said in one of its editorials.

Officially, Chinese authorities state that the order was passed to preserve an important and ancient tradition. China’s governor in Tibet, Padma Choling, has even stated that the Dalai Lama has no right to stop reincarnating.

"The Chinese occupation has created dark days ahead for Tibet and this has resulted in the largest number of self-immolations in human history", said Nyima, a Tibetan analyst. Historically, Tibetan dynasties often conflicted with Chinese dynasties. Tibet has been an independent country throughout the historical periods, it is supported by the country's geography, history, language, culture, religion, and race. Except for a few border regions in the Far East of Tibet, there was almost no Chinese population in high plateau Tibet until the People's Republic of China (PRC) invasion between 1949 and 1951.

During the military invasion, China killed more than 1.3 million Tibetans, and continues to carry out a policy of apartheid, the communist authorities led by Chairman Mao Zedong completely destroyed over 6000 monasteries and historical sites in 1959.