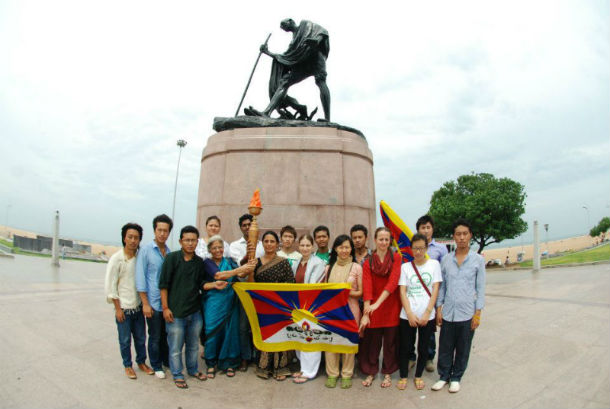 Chennai July 19, 2012: - The South India leg of "Flame of Truth" relay concluded in Chennai on July 18 to begin its next journey to Karnataka state, South India. The relay concluded at the statue of Mahatma Gandhi situated at the seaside in front of the Madras University.

Later today, two representatives of TSAM left Chennai with the "Flame of Truth" torch for its next destination to South Indian state of Karnataka. The torch will reach tomorrow on July 20 at Tibetan settlement, Bylakuppee.

The South India leg of "Flame of Truth" relay, which was launched from city of Kochi on July 6, had so far travelled to Coimbatire, Pondicherry, Auroville and Chennai. During the past relay in South Indian cities and towns, many eminent individuals had shown their support towards the cause of Tibet by signing Tibet petition to be submitted to the UN on December 10, 2012. The supporters include former Judge, former Police Officer, former Senior Civil Servants, Sportsman, Artists, Professors and Academicians.

Followings are three demands of the relay:

1. The United Nations must discuss the issue of Tibet based on the resolutions that it has passed in 1959, 1961 and 1965, and continuously make efforts to fulfil the substance of these resolutions

2. An independent international fact-finding delegations must immediately be sent to investigate the ongoing crisis in Tibet

3. The United Nations must take special responsibility to ensure that the basic aspirations of the Tibetans inside Tibet are fulfilled