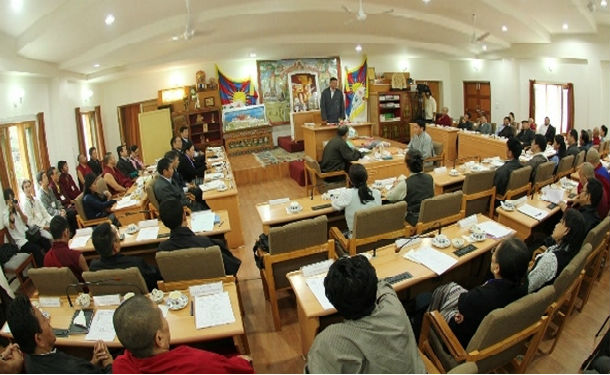 Dharamshala: The 15th Tibetan Parliament-in-Exile convened its 4th session Friday, September 14. It was held in Dharamshala, India, the heart of Tibetans in exile.

At the beginning of the session the Speaker of the Tibetan Parliament, Mr Penpa Tsering spoke about the Tibetan self-immolations as well as current tense situation in Tibet.

"Since March 2009, there have been 51 cases of Tibetans setting themselves on fire. Of them, 41 are confirmed dead." He admitted that these numbers may not be accurate, due to the lack of details available about such incidences.

In his opening address, Mr Penpa Tsering, Speaker of the Tibetan Parliament, said over 51 Tibetans have set themselves on fire in Tibet and their family members are living under an extremely difficult situation.

He said the Chinese government, instead of looking into real causes as to why Tibetans are setting themselves on fire, has exacerbated the crisis in Tibet by stepping up military crackdown in the Tibetan areas. "So, a motion will be tabled on the first day of this session to express our solidarity with our brethren who are continuously suffering the under the Chinese government's repressive rule," he added.

He said given the gravity of the situation in Tibet, the entire first day of this parliament session will be kept for deliberation on the Chinese government's policies in Tibet and the developing situation in Tibet.

Speaker Penpa Tsering spoke about the upcoming special general meeting of Tibetans from 22-28 September, and the efforts made the Kashag and the Parliament to garner international community's support to end the Chinese government's repression in Tibet. "We need to strengthen our campaigns as no concrete action has come from the international community in view of the urgency of the situation in Tibet," he added.

He said there is no clarity on how the new Chinese leadership will handle the crisis in Tibet, adding that in order to resolve the issue of Tibet through dialogue with the Chinese government, Tibetans in exile must sustain our movement to draw the world attention to the plight of Tibetans in Tibet. Commending the campaigns carried out by the Tibetans such as the ongoing flame of truth relay across the world, the Speaker urged Tibetans to actively participate in such movements.

He said this session will debate on the annual work report of the Kashag and the review report by the standing committee. The last day of the session will be kept for Kashag's statement and response to questions, he said.

"Instead of doing their duties, a small group of Tibetans have engaged in making groundless claims on matters concerning the general meeting, special parliament session and His Holiness the Dalai Lama's devolution of political authority to the democratically-elected CTA leadership, to create discord in the community. Such people are concerned only with their opinion whenever the parliament tried to clarify the matter," he said.

"Though His Holiness the Dalai Lama has initiated the recent move to further democratise the Tibetan polity, it was ultimately the parliament which approved the final decision. So the responsibility lies with the parliament to prevent things which cause distress to His Holiness. Not only the speaker but the entire parliamentarians and the administration must act to deal with such matter. It is very important that the parliamentarians should make clear position mandated by the general public during their official visits to Tibetan settlements and communities. But if you expressed own personal views, then you are not carrying out your responsibilities of being a parliamentarian," he said.

He underlined that the parliament should pledge to prevent things which could bring distress to His Holiness the Dalai Lama in future, adding the Kashag, Parliament and the NGOs have equal responsibilities to deal with such matter.

He also emphasised that importance of raising awareness and understanding among the general public on the issue, failing which will cause disagreement between us and those who are making the baseless statements.

He said His Holiness the Dalai Lama takes every decision to carry out his visions only after long-term consideration and discussion. Tibetan public should understand that it is wrong to speak out without understanding the reasons behind His Holiness's initiatives, he added.

He said the media plays a very important role in disseminating information in our society, but it can also become a medium to spread discord within the community. He said some people write under pseudonyms articles and comments in websites to destablise the community and denigrate His Holiness the Dalai Lama. It is of utmost importance for those managing the news websites to properly verify the contents of and intentions behind such articles and comments, he added.

The Parliament then deliberated on a resolution expressing solidarity with the Tibetans living inside Tibet.