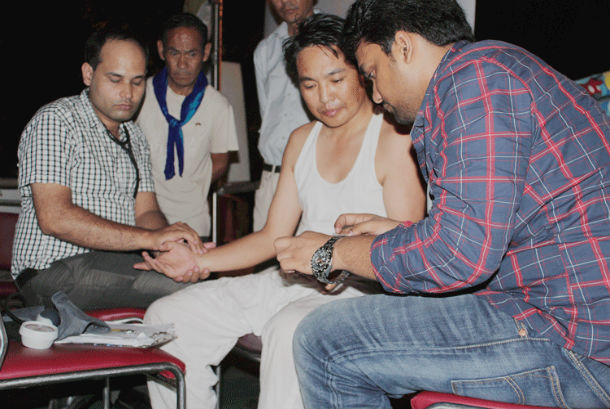 New Delhi, 17th September, 2012: -- The revelation of this 15th day of the Indefinite Hunger Strike came from the visit to the Embassy of Switzerland. TYC Joint-Secretary, Tenzing Norsang and Social Services Secretary,Yeshi Therchein went to the embassy today to meet Mr. Martin Strub, Minister and Deputy Head of Mission of the Embassy of Switzerland.

They went along with a complete package of information in the forms of photos, videos, the chronology of the self-immolators, an appeal letter, the details of the Indefinite Hunger Strike and sat down for a full discussion on the current situation inside Tibet, the atrocities committed against the Tibetans by the Chinese government and the 51 self-immolations inside Tibet and the fearful rise of the numbers day by day.

TYC requested Mr. Strub to have the government and the people of Switzerland raise their voices in the 21st session of the Human Rights Council of the United Nations taking place in Geneva regarding the issue of Tibet and the undeclared martial law in Tibet by the Chinese government. TYC representatives explained the demands of the Indefinite Hunger Strike needing action from the United Nations and the European Union.

Mr. Strub's response at the end of the discussion was that, he appreciated the two TYC leaders to have taken the initiative to approach the Switzerland government with evidences and information and explaining the real situation as it happened that the Chinese government's propagandist attempts had been serving a lot of misinformation and unclear details about the situation in Tibet. He assures TYC that they would definitely do their best to highlight the issue of Tibet and hoped for the best to resolve the issue of Tibet.

The three hunger strikers, Dhondup Lhadar, Penpa Tsering and Jigme Sholpa woke up out of their beds at Jantar Mantar as a usual morning here now, with no food for the last 15 days hence a little light headed and needing help when going to the bathroom to ensure that they do not fall down and hurt themselves.

Their helpers are incredibly attentive and make sure that they have all the help they need during the course of the days and nights. The need to keep a sharp eye out for them increases as the number of days without food increases and their bodies weaken day by day. Hopefully, the Tibetans all over the world know that sacrifices like these are being made by a number of leaders in our community and hence choose not to be left behind.

An organization called Sarvodayasamaj showed their willingness to support Tibetans by pouring their heart out for our cause on a piece of paper with their letter head on it. They issued us two such letters. This is a group of people who have been waging their own protest in a tent opposite to ours. TYC was quite touched by this experience.

Towards the end of the day, Delhi Police called upon the TYC staff to warn them yet again that they do not have the authorization to continue with the Hunger Strike during the night time, to which TYC explained that their campaign requires them to continue through out the days and nights as well and the fact that all the activities are peace-oriented, they would be no trouble caused to the Indian government.

In order to build pressure on the UN, EU and the government of China, we have to continue on with no halts in between. At the end, the police informed TYC that they will have to check and confirm if the authorization will be given to continue in the nights by tomorrow. TYC had decided long back that they will continue with the campaign 24 hours, whether they get the authorization or not.

TYC will be visiting the embassies of different countries in the coming days and find the opportunity to hold discussions with their leaders and appeal for their support for the cause of Tibet.

The Global Solidarity Campaign commences tomorrow, and TYC has organized a Mass Candle light vigil at 6.30pm in Jantar Mantar. TYC requests all the Tibetans and our supporters to join us and take part in the campaign to pay homage to our martyrs and the three hunger strikers. We believe and hope that the UN, EU and government of China will pay attention to our efforts and take action to the path of truth.