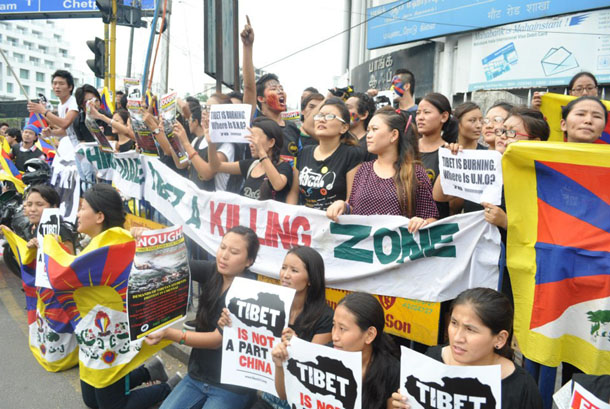 Dharamshala: One of Chennai's busiest streets, Gemini flyover, saw an extraordinary site on November 21. Over 110 students took to the streets, dressed in black t-shirts to protest against the incoming Chinese government's stance on self-immolations in Tibet.

Chennai's Tibetan students better known as Tibetan Students Association of Madras (TSAM) decided to express their extreme disillusionment with the Chinese government for the indifferent stance on the recent spate of self-immolation inside Tibet. The current total, according to sources are close to 78 fiery protests.

At round 3:00 pm on November 21, emotional Tibetan students gathered to protest opposite the United States Consulates. This demonstration comes after the change of leadership in Beijing CCP by appointing seven new Chinese leaders.

The students demonstrated their disappointment through slogans coined on their T-shirts. Two groups initially stormed the flyover unfolding banners marked with "Tibet is not part of China" and a photo banner with the title- "Seven new terrorist leaders of China on Tibet" referring to the new Chinese Politburo members who are set to take over China from Hu Jintao, the outgoing President.

The police immediately arrested all of the protesters and detained them for more than five hours. The authorities promised to release them, but according to sources the attendees have been detained further.