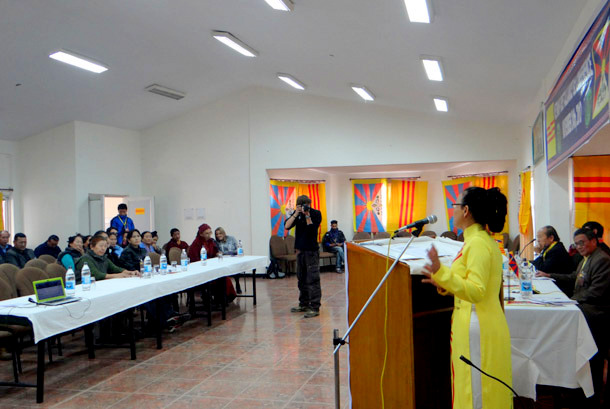 The keynote speaker was Prof Vuong Ding Bach, a former professor of civil engineering in Saigon who participated in the Vietnamese human rights and democracy movement, was arrested in 1976 by the communist Vietnamese government and was imprisoned for almost ten years with hard labour.

Mr Thupten said the TVA was founded informally eight months ago by himself and Ms Nguyen, a Vietnamese freedom fighter who served 14 years in prison.

Mr Phuntsok Wangdhu, also know as Soepa, next spoke to the meeting. The executive member of Gu Chu Sum ex-political prisoner's association and President of VTA said, "The Chinese self-made political conflict between two nations should be resolved through the medium of an international committee and international media.

"By mutual cooperation and unity between two nations [Tibet and Vietnam], we would like to set up a political movement in Asia." Professor Vuong Ding Bach then gave his detailed keynote address on the similarities between the Tibetan and Vietnamese nations' oppression and manipulation by the chinese communist party, saying, "..the present government of Vietnam is nothing but a servile lackey in the pay of the Chinese communists in Beijing... Let us remember well the extreme peril: 'Today's Tibet, tomorrow's Vietnam!'".

Professor Ding Bach continued, "We wholeheartedly will fight along with the brave Tibetan people for safeguarding the survival of our two nations...until our sacred goal will be met," and concluded, "How is it that there is a multitude of animal rescue agencies when there is so little relief agency for human lives endangered by the brutalities of other humans?"

The penultimate speaker, Mr Karma Choephel, former Speaker of the Tibetan Parliament-in-exile told the audience, "Last year, I happened to see some posters and pamphlets in Dharamshala, calling for the start of an alliance between Vietnam and Tibet for freedom.

"Even today, the so-called government of Vietnam, which is a puppet of the communist Chinese regime, is also similar to the situation that is prevailing in Tibet.

"So, with a number of similarities...that we share, it is fitting that an alliance of Vietnam and Tibet is to be started, and so today, perhaps in a small way, in this room we are making history."

The meeting was attended by over 100 people.