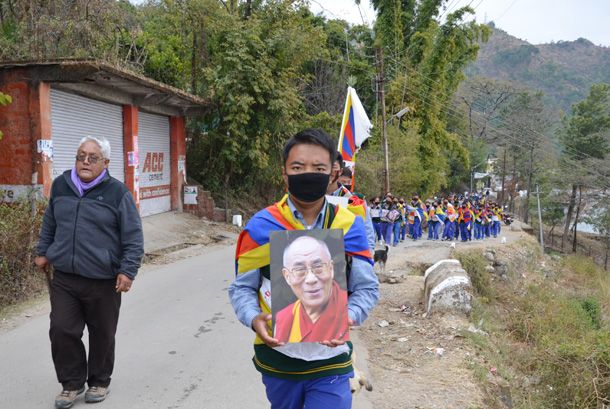 The 103 students from the Tibetan Children's Village Sujia school, joined by five staff members including the school's principal, Sonam Sichoe, and director, Ngodhup Wangdu, marched between Bir and the Dalai Lama's Main Temple in Dharamshala, on December 27 and 28.

The 60 girls and 43 boys carried Tibetan and Indian flags, pictures of the Dalai Lama and Mahatma Gandhi, and placards bearing the names and pictures of the 95 people who have set themselves alight in Tibet protesting Chinese rule in their country since 2009, as well as those of Tibetans who have self-immolated in India and Nepal, such as Thubten Ngodup, the first Tibetan to self-immolate, who did so in Delhi in 1998.

Dakapa, 22, said: "In Tibet, Tibetan people have no rights. They sacrificed their lives for freedom.

"In Tibet many students have no right to learn their traditional culture and language. Many people burned their bodies so we did this march to support them.

"I'm very tired and my feet are very painful. So many students hurt their feet."

Class 10 students, Kelsang Tsering and Konchok Rinchen, who organized the march, said in a statement: "We urge the United Nations and the international community to stand for justice in Tibet and strongly pressurize the leaders of the Chinese government for a peaceful and meaningful resolution to the Tibetan problem.

"We also express our solidarity with the thousands of Tibetan school students who staged a protest rally inside Tibet, raising slogans for the freedom of language, respect for truth and freedom of religion and cultural identity.

"We appeal to all the Tibetans in exile and Tibet support groups spread across the world to continue the freedom struggle with more gravity and determination to fulfill the demands of the self-immolators, and all Tibetans in general."