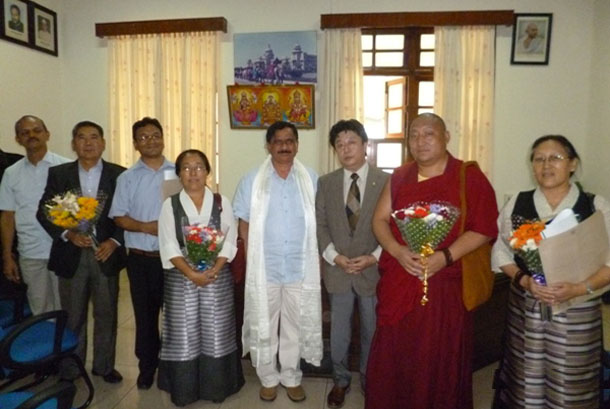 Coinciding with the auspicious beginning of the New Year, the six-member South Zone Tibetan delegation apprised the honorable Speaker of the grave situation that has led to waves self-immolations by the Tibetans inside Tibet spurred by China's repressive and draconian policies.

The delegation also presented a Memorandum soliciting his support and solidarity in the Tibetan freedom struggle and in putting an end to the ongoing crisis in Tibet.

"In the light of the ongoing crisis in Tibet, which is both political and humanitarian in nature, the Central Tibetan Administration and Tibetans the world over will observe 2013 as the year of "Solidarity with Tibet", the memorandum states.

"It will not be unknown to you that 95 Tibetan martyrs have self - immolated since February 2009 as a demonstration of their strong resolve among Tibetans in Tibet to compel the Chinese Government to repeal its oppressive policies. Instead, even after the once-in-a-decade transitional change of Chinese leadership this year, the whole of Tibet is effectively under a clampdown and remains closed to foreign tourists and scribes," the Tibetan Parliament stated in the memorandum.

Shri Bopaiah received the delegation at his chamber with bouquets and refreshments. While expressing his pleasure in meeting the delegation, Shri Bopaiah assured his support to the Tibetan people and also offered a message of solidarity for the forthcoming Public Rally by the delegation. During the ensuing meeting that lasted nearly an hour, the delegates apprised the honorable speaker of the current grave situation in Tibet.

The delegation thanked him for the overwhelming support rendered by the Government and the people of Karnataka State to the Tibetan regufees. The delegation reciprocated the warm gesture of the honorable Speaker by extending an invitation to visit the Tibetan Parliament in Dharamshala.

Prior to the meeting with the Speaker in the August House, the Secretary General, Private Secretary to the Speaker and the other officials of the Secretariat accorded a warm reception to the delegation and toured the entire chambers of upper and lower houses.

The delegates will also address a press conference today at the Press Club. In the following week, the Tibetan delegation plans to call upon many more constitutional authorities, political leaders as well as eminent personalities in the city.
The Solidarity campaign in the city will conclude with a major Public Rally from the Freedom Park to the Cubbon Park and a Prayer Vigil on the 5th January 2013. The Rally will be addressed by various eminent personalities and will be participated by Tibetan students and Tibet-supporters based in Bangalore.

The Tibetan Parliament's All India "Solidarity with Tibet" campaign endeavor to honor the martyrs of Tibet particularly the 95 Tibetans who self-immolated inside Tibet, promote awareness of the critical situation in Tibet and garner valuable support for the cause of Tibet from the general Indian public and the Government.

The Tibetan Parliament in Exile has delegated three six-member delegations to travel all over India for the undertaking of this crucial Tibet campaign. The South Zone delegation, after concluding the campaign in Bangalore will travel to the cities of Hyderabad, Thiruvananthapuram, Pondicherry and Chennai followed by Panaji, Mumbai, Ahmedabad and Jaipur.