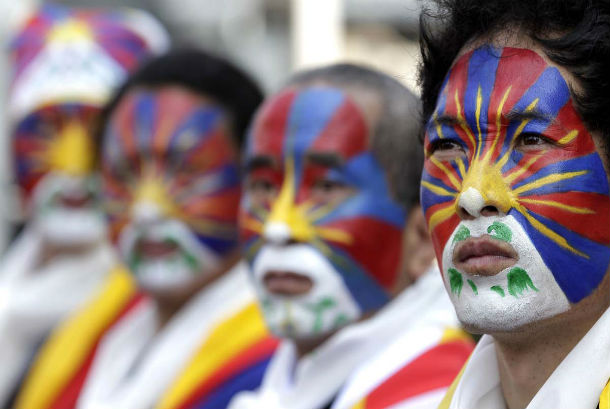 Dharamshala: On the eve of the G20 summit, 5 Tibetan NGOs sent a strong message to G20 leaders to "Unite for Tibet", and tackle Xi Jinping about his Party's 60-year occupation of Tibet and appalling human rights abuses during the G20 summit in St Petersburg (5 and 6 September).

Staging a protest in Dharamshala, the NGOs highlighted the Tibetan peoples' increased resistance to China's rule through protests, cultural resistance and the drastic act of self-immolation, and the urgent need for Governments to stand together in address the crisis in Tibet.

"China needs the world as much as the world needs China," said Ms Tsewang Dolma, Information and International Relations Secretary of Tibetan Youth Congress. While we understand the need to further strengthen economic ties, we must remember that principles and values that sustain human rights, respect and dignity should be treated with equal importance.

Tibetan Youth Congress believes that in order for there to be genuine progress in either economic or political field, G20 members must respect the right for people to have freedom and then hold accountable those nations who deprive people of basic human rights.

Tashi Dolma, President, Tibetan Women's Association said "The situation in Tibet is fast deteriorating. China's priorities of economic growth and political stability are implemented through hard-line policies inside Tibet and the exploitation of its fragile environment, without respect for human lives or human rights.

The recent instances of Chinese security forces opening fire on Tibetans celebrating the Dalai Lama's birthday in Tawu and beating crowds of Tibetans protesting illegal diamond mining in Gedrong Zatoe are examples of the intensified crackdown."