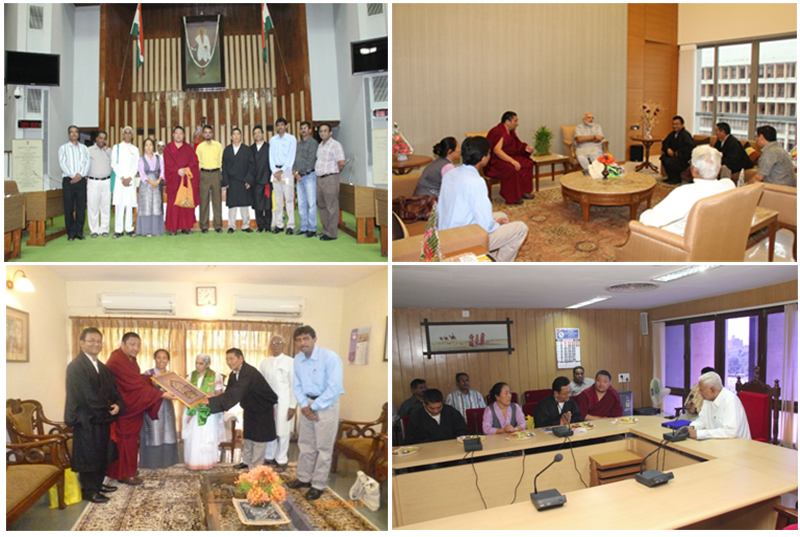 The Tibetan Parliamentarians were accorded a warm reception by the honorable Chief Minister of Gujarat, Shri Narendra Modi at the CM Office on 6th evening despite his hectic schedule.

The delegates greeted him with ceremonial scarf and Memento and also briefed him about the ongoing crisis in Tibet especially the unprecedented spate of self-immolations as a result of Chinese repression. The delegates urged him to raise the issue of Tibet and render his support for early resolution of the Tibetan crisis.

Shri Narendra Modi, in response assured the Tibetan delegates of his awareness of the Tibetan struggle and his long association with the Tibetan cause. He assured his solidarity and vows to do his utmost in future. Mr. Modi also told the delegates that he knows how much the Tibetans inside Tibet revere, love and miss the Tibetan Spiritual leader His Holiness the Dalai Lama.

Therefore when he visited Mt Kailash, despite warning by the security people, he secretly took photos of Dalai Lama and offered them to Tibetans in Tibet. "The Tibetan people in Tibet were so delighted to receive the gift" Mr. Modi said.

Shri Narendra Modi, who is also in the news as India's BJP Party's prospective Prime Ministerial candidate for the forthcoming election, also told the Tibetan Parliamentarians to convey his heartfelt Greetings to His Holiness the Dalai Lama.

Earlier that day, the delegates were received with great honour at the Legislative Assembly of the Gujarat State by the Honorable Speaker Vajubhai Vala and the entire staff of the Secretariat.

The delegates were taken for a tour around the Assembly Hall, the Library and entire campus.

Following this, the delegates were greeted with Souvenir and refreshments and briefed by the Honorable Speaker Vajubhai Vala.

Honorable Speaker Vajubhai Vala, during an hour-long meeting, expressed his steadfast support for the Tibetan struggle and inspired the Tibetans to fight for freedom with resolve and determination.

Shri Vala affirmed, "Though your struggle is very tough but you should not be discouraged. You must continue to struggle and take lessons from the Jew people who fought for their nation for thousands of years.

They were once scattered like today's Tibetans but they were united and worked hard with the belief that they will achieve their goal one day." "They encouraged and greeted each other by resolving "Next Year in Jerusalem". You should also say, "Next Year in Tibet" Mr. Vala stressed.

Later in the afternoon, the Tibetan delegates called upon Shrimati Dr Kamala Beniwal, the Honorable Governor of Gujarat state. Dr Beniwal thanked the delegates for the visit and offered refreshments and the State Memento.

She also expressed her admiration for the Tibetan people's firm determination and perseverance amidst so much sufferings and losses. "I am overwhelmed by your dedication and wish you all the best in your struggle. The Chinese Government is a Government lacking any human morality" Dr Kamala Beniwal stated.

During the briefing on the escalating crisis in Tibet, the delegates stressed on the need of urgent diplomatic actions by Indian Government in pressuring Chinese leadership to address the true grievances of the Tibetan people inside Tibet.

Later today, a press conference and a Public Talk will be organized at the Circuit House, the Government Guest House; where the delegates were hosted by the Tibet-supporters on their arrival in the city.

A four-member South Zone Tibetan Parliamentary Delegation comprising of 1) Ms. Tsering Youdon, 2) Ven. Atuk Tseten, 3) Mr. Jigme Jungney, and 4) Mr. Lobsang Yeshi are on a Lobby Tour in the Gujarat State. The Delegation will leave for Rajasthan on the 10th September after concluding their campaign in the city.