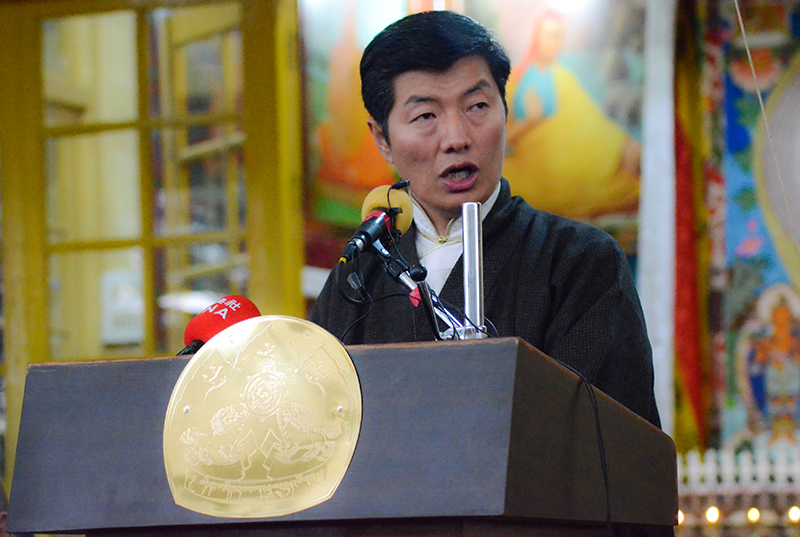 Dharamshala: - Dr Lobsang Sangay, Sikyong or political leader of the Tibetan people, expressed deep concern at the destruction caused by the fire in Gyalthang that has damaged almost two-thirds of an ancient Tibetan town.

His comments came after a huge blaze ravaged the ancient Tibetan town of Gyalthang, eastern Tibet destroying over 300 homes on late Saturday, 11 January.

Sikyong has called for a quick restoration of the ancient Tibetan town, urging that the restoration should be done according to the traditional Tibetan style.

"The restoration processes should be fair and unbiased," said Sikyong Dr Lobsang Sangay, who is currently in New Delhi for an official visit. During the restoration in Kyigudo, Yushul in the aftermath of the devastating 2010 earthquake, lands were illegally grabbed by unscrupulous Chinese authorities, leading to protests by local Tibetans including a self-immolation by a Tibetan woman.

This is the 3rd such as major fire to break out in eastern Tibet within less than three months, which followed the blaze at another influential Buddhist institute– the Larung Gar monastery in Serta County.

Expressed his deep concern over the destruction caused by the fire in Serta County, Dr Sangay said he "hopes and calls for the quick restoration of this important learning centre so that it could continue to contribute to the preservation and promotion of study of Tibetan Buddhism and culture".

Earlier in November 2013, a massive fire destroyed the main prayer hall of Lithang monastery in the same region.

Some news reports also suggest an 'urban renewal' drive by the Chinese government, which saw dozens of old structures dismantled through fake accidents. With this latest accident, the Old Town, primarily Tibetan homes, has now been seriously decimated.