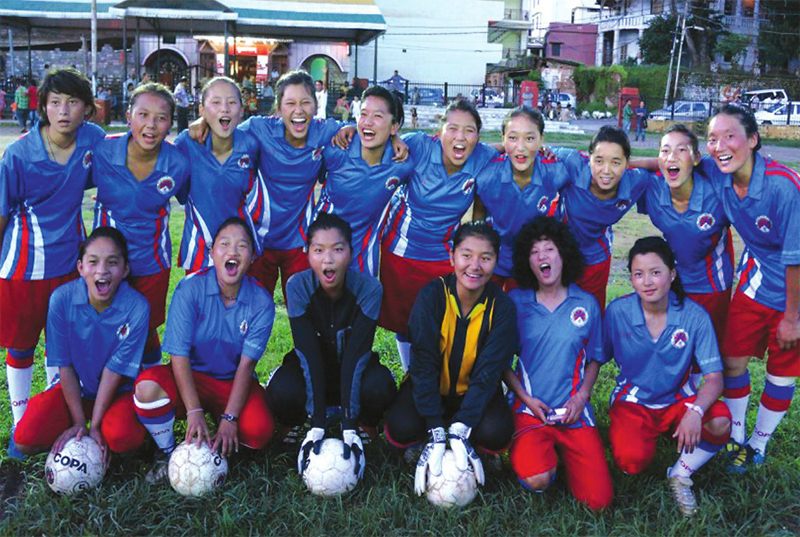 Dharamshala: - Tibetan National Sports Association (TNSA) in India announced on Tuesday, 21 January, that the Tibetan Women's Football team will participate in the one-week Football Festival of Manipur, India. At the event the team will not only compete against top Manipuri teams in three matches, but will also engage in cultural exchange programs.

13 club teams form the basis of the women's football program, which recruits the top players from these organizations to train with the Tibet Select Squad. This elite team trains each June and January, and has participated in friendly competitions with the Himachal state team, Haryana state team, Karnataka and Himachal district teams, and the Guru Nanak Dev University team in Punjab. This January the team trains at the Tibetan Children's Village School in Chauntra, then will travel to the state of Manipur for the Festival the week of 13-18 February.

During the 2014 winter training session, Mr Shane Kidby of New Zealand will be serving as Head Trainer. Mr Kidby played in New Zealand's National League and competed at the semi-pro level in England's Dr Maarten League. He has ample previous coaching experience with top women's teams in New Zealand and as Head Coach for Coolum FC Men's Club in Australia.

In what is a particularly exciting development, the entire training and competition process will be filmed for a documentary titled "Kicking Boundaries", a creation of I-imagine Entertainment based in Delhi. The film documents the story of the Tibet Women's Football Program and its individual members as they strive towards their ultimate aim: for the Tibet Select Squad to compete in the Olympics as Tibet's first women's national team in any sport.

Since 1959, Tibetans displaced from their homeland have gathered on the edge of the Himalayas to play football as a way of developing character and enjoying themselves. TNSA believes the sport allows women to enrich their lives through playful interaction with each other that generates a positive presence in their community and inspires hope for the future. Even the United Nations has lauded sports as an endeavor that can unite entire communities and bridge cultural divides.

Tibet Women's Football (TWF) is an organization that "aims to facilitate the expansion of the female Tibetan voice, nurture the idea that Tibetan women possess the talent and capabilities equivalent to men, forge the bonds of sisterhood, and provide an arena in which they can safely experiment with these new developments." The group's desire to participate in cultural engagements while at the Football Festival derives from its belief in "a professional, well-rounded curriculum of leadership, team building, gender equality, health, and communication."

TWF also argues working together to empower Tibetan women through sports will prepare them to affect change in their communities and to become international sports ambassadors of peace and tolerance. "Sport is simply the tool by which we frame and deliver lessons and experiences focused on these themes