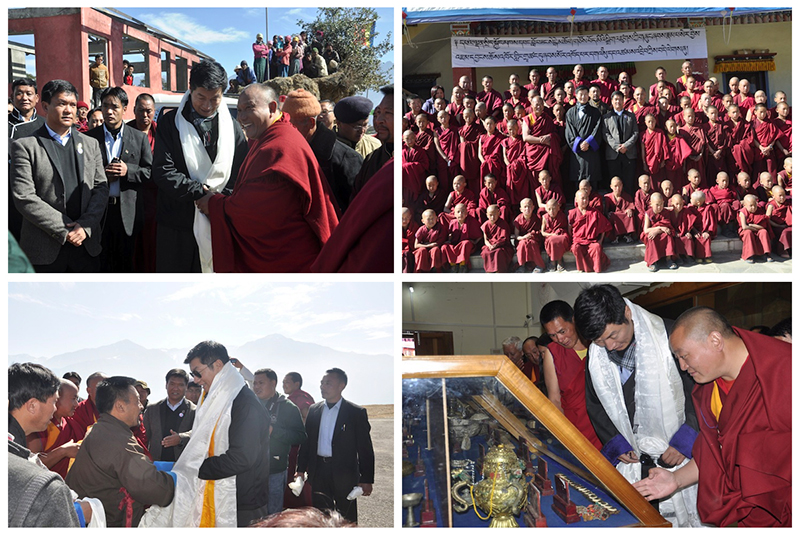 Tawang, Jan 25: - The Sikyong of Central Tibetan Administration (CTA) Dr. Lobsang Sangay was given a warm welcome by Minister Tourism and RWD, Pema Khandu with traditional garlanding of 'Khatak' (scarps) on his arrival at Urgen Sangpo Helipad, Tawang.

According to a report by Arunachal Times, the Deputy Commissioner Tawang Abhishek Dev, ZPC Jambey Tsering and SP Tawang along with other host of public leaders received Dr. Lobsang and his entourage at the Civil Helipad.

En-route to the district head quarter, the Sikyong made a pilgrimage visited to Jamyang Choekhorling Monastery and the birth place of the 6th Dalai Lama – Tsangyang Gyatso at Urgelling in Tawang.

On arrival at Galden Namgey Lhatse the Dr. Lobsang along with Pema offered their prayers and paid reverence to the 27ft high Golden Buddha.

Later in the day, a private meeting between the Sikyong and the Tibetans was held at Zomkhang hall which was roughly attended by about 200 Tibetans settled in Tawang.

The state guest extended his heartfelt gratitude to the Chief Minister Nabum Tuki, Pema Khandu and in general the people of the State for the love and support rendered to the Tibetan community in Arunachal Pradesh. "I had never imagined that I would be in a position to visit Arunachal in such a brief time, I couldn't have made the visit possible if it was not for the effort taken by Pema", said the Sikong of CTA.

Dr. Lobsang is on a weeklong tour to Arunachal Pradesh will be visiting various Tibetan settlements in Arunachal Pradesh viz. Tenzingang, Miao and Tezu on 27th, 29th and 30th January respectively. He is also scheduled to visit Bomdila, Khalaktang and Tuting.