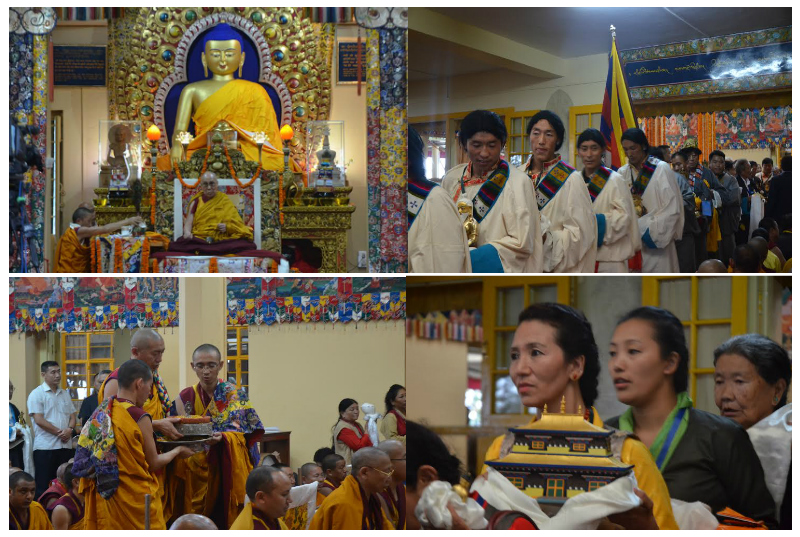 Dharamshala — At the very crack of dawn on Monday, July 20, a stream of people flowed in to the Tsuglakhang Temple quarters. By the time it was 8AM, the temple floors were packed with nearly 6,000 eager Tibetans and non-Tibetans, waiting with bated breath to catch a glimpse of His Holiness the Dalai Lama.

Flashing his endearing smile, His Holiness, who turned 80 this month, waved at the people gathered for the Long Life Offering (Tenshung), as he walked into the temple courtyard. From young to old, people craned their necks, moved to the very edge of their seats and cheered for their much loved spiritual leader.

Dressed in traditional attire with colourful dresses and headgears, Tibetans hailing from various parts of India and Nepal waited for their turn to offer their prayers and presents to His Holiness. Several notable attendees at the ceremony included Gyurmey Monastery's former Khenpo, Gosok Rinpoche, Taklong Shapdron Rinpoche, Taklong Matrel Rinpoche, the head officers of the three pillars of the Tibetan Democratic Administration and other government officials.

He also highlighted the role and significance of monasteries, which was not restricted to mass prayers and rituals alone. "For forty years or so, I have urged monasteries where there was no tradition of study to introduce it. Nowadays, I urge lay people to study too, and increasingly many are doing so. The Nalanda tradition placed emphasis on logic and epistemology, which deals with the nature, sources and limits of knowledge. We Tibetans have kept it up. This is our treasure, it can be a treasure for the world too," said His Holiness, as the people listened intently.

The Tibetan leader accepted the Long Life offerings from various organisations, associations and groups this year as he turns 80 as per the international calendar and 81 as per the Tibetan lunar calendar. "Since I don't have much time, I have decided to accept Tenshug offerings jointly from different groups," he said.