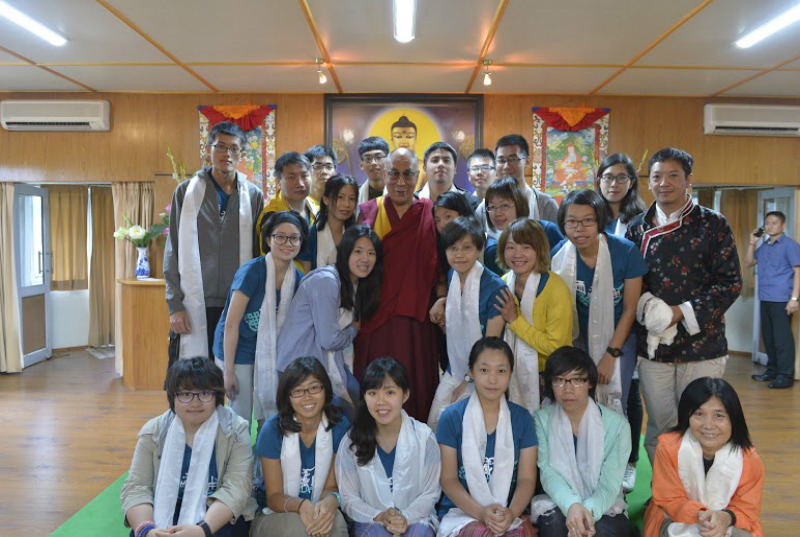 Dharamshala — A group of Taiwanese students met with His Holiness the Dalai Lama in Dharamshala in northern India, during which meeting they presented him with a Free Tibet Literary Award.

"21st century is a peace century and I expecting the younger generation of today could gather efforts on creating a peaceful and better century.'' His Holiness the Dalai Lama told a group of students from Taiwan on July 24, 2015.

"Nowadays, people emphasize on the differences between each other, this is the problem now to the humanity, Human being are born free and equal."

"We should emphasize on the oneness of humanity, practicing the compassion and affection unite the humanity," His Holiness added.

The lecture with the spiritual leader of Tibet, His Holiness the Dalai Lama was organized by SFT Taiwan on Friday, July 24, at Main Temple in Dharamshala, India.

The event held by SFT Taiwan who has held a plenty of events that about Tibetan issues, His Holiness the Dalai Lama gave positive affirmation.

The students of SFT Taiwan are assigned to Central Tibetan Administration ,the congress of Tibetan in Exile and the lecture with the spiritual leader of Tibet, His Holiness the Dalai Lama and the 17th Karmapa Ogyen Trinley Dorjee during the 21 days visit touring in Dharamshala.

They are expecting to acknowledge about Tibetan culture, religion and the reality in between Tibet and China based on the diversity of aspects.

"21 century is a peace century and I expecting the younger generation of today could gather efforts on creating a peaceful and better century.'' said the spiritual leader of Tibet, Holiness the Dalai Lama on July 24, 2015.

The 1st Free Tibet Literary Award were launched since the end of 2014 and the theme is " The Day of My Life",and it's hoped to let people understand more reality about the Tibetan issues and to know how the Tibetans and the Peace-Loving supporters struggle for the freedom and democracy.

The enlightenment consistent with the profound words ''Eternal Love -is to practice Compassion and self-improving,'' said the 17th Karmapa, which animated them to greater efforts.

''While we are living in a comfy and decent life, we should think about that the Self –Immolation and the occupation and oppression by Chinese authorities constantly happening at the same time in Tibet,'' Said Tung, Ching-Jung, the leader of SFT Taiwan, she hopes that people could understand more about how Tibetans struggle for the freedom, peach democracy and remember every self-sacrifice is stand for the freedom.

Students for a Free Tibet Taiwan plans visiting tour to Dharmshala every year from 2013. Around twenty Taiwanese students are qualified to join the touring and get detailed interacting with exile Tibetan in Dharmshala.

Members will be assigned to organizations including Central Tibetan Administration, Students for a Free Tibet India, or relative institute for intern. By being involved in intern works with their Tibetan colleagues, Taiwanese Students could know more about Tibetan issues and spread the issue to more people in Taiwan.