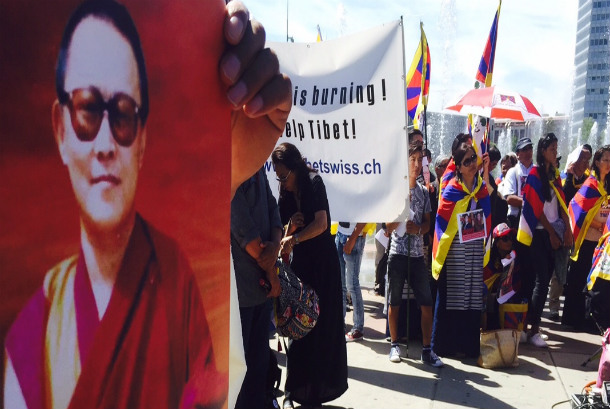 Geneva --Tibetans living in Switzerland & Liechtenstein organised a rally in front of the United Nations building in Geneva on July 31st to show solidarity with the recent death in prison of Tenzin Delek Rinpoche, a highly respected Tibetan religious leader and environmentalist, who died in Chinese prison while serving a life sentence.

Over 200 Tibetans from 25 different communities in Switzerland and Liechtenstein came together under the coordination of Local Tibetan Assembly, Tibetan Women's Association, Tibetan Youth Association of Europe, Swiss Tibet Friendship Association and the Office of Tibet to take part in the rally.

The rally started at 11:30 am local time with a singing of Tibetan national anthem followed by a minute's silence in memory of the deceased. The President of Local Tibetan Assembly, Mr. Tenzin Nyingbu gave an introductory speech on recent incidents that have happened in Tibet and appealed to the International Community for urgent intervention and impartial investigation into the causes of these mysterious deaths.

The day also included a prayer service for Tenzin Delek Rinpoche organised by the Tibetan community of Switzerland & Liechtenstein at Rikon Choekhorling Monastery.