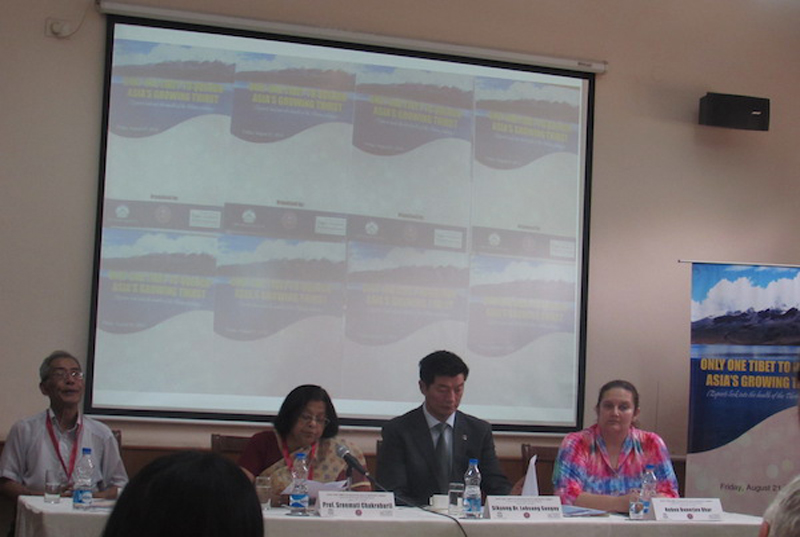 New Delhi — Addressing a conference in New Delhi, focusing the rivers that flow into the sub-continent from Tibet, Sikyong Dr Lobsang Sangay said "the lives of billions of people living in Asia are at risk as China builds large scale damming of the rivers in Tibet" which provide fresh water to downstream Asian nations.

The conference titled 'Only One Tibet to Quench Asia's Growing Thirst' organised by Tibet Policy Institute (TPI) was held in New Delhi, the capital of India, in collaboration with University of Delhi and the Foundation for Non-Violent Alternatives.

Explaning the issue of Tibet is not only for 6 millions, but it has major ramification for a billion people in south Asia and South East Asian Nations, Sikyong said "Tibet is the only one to quench Asia's thirst for water."

"Water has become a strategic weapon for China," he said, adding, "China has not signed UN convention on Water Sharing," Sikyong said, while expressing his deep concern over the geopolitical tension, including war over water in Asia, as predicted by environmental experts.

"Environmentalists in China say China has built 87,000 dams, which are not only largest but dangerous too. China plans to build a dam on Brahmaputra larger than one on Yangze river, if that happens, what will happen to the flow of river to India and Bangladesh? he asked the audience.

"If China has the control on the flow of the river, it can have major implication for the crops in downstream countries," said the democratically elected political leader of the Tibetan people.

"Tibet, known as the world's Third Pole, has over 47, 000 glaciers which provide water to rivers on which survive 1.3 billion in Asia for freshwater," he further added.

What will happen for these billion people if the glaciers melt at this rate? That is the biggest challenge facing us today," he stressed referring to NASA predicts that 60% of Tibet's glaciers will melt in the next 40 years.