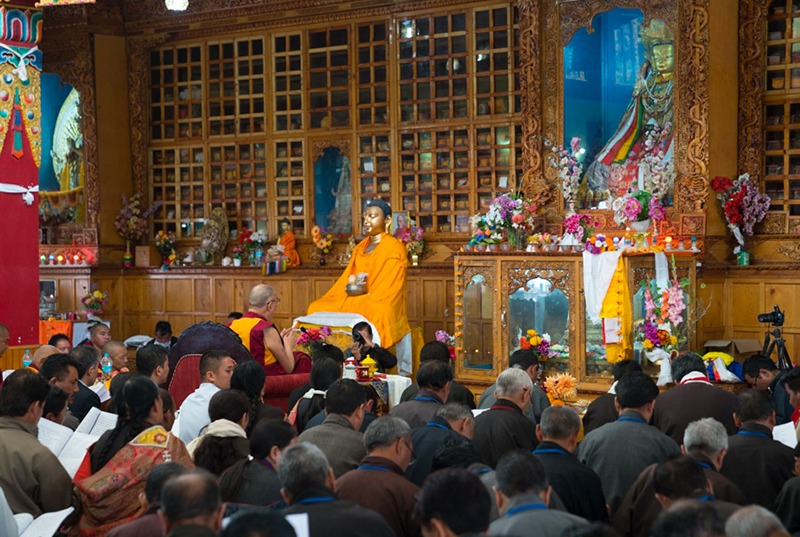 Leh, Ladakh — The spiritual leader of Tibet, His Holiness the Dalai Lama said that whenever he visits Tibetan Temples, he advises Tibetans to not only use the Temples as places of worship but to make them centers of learning.

His Holiness led the gathering with an opening prayer In Praise of the Buddha, at the Jokhang Temple in Ladakh, on July 27. This was followed by prayer reading of Tsongkhapa's In Praise of Dependent Origination (tendrel toepa) and His Holiness' Prayer for the Spread of Ecumenical Teachings of the Buddha.

"It was important to introduce the philosophy and teachings of the Buddha. Knowledge of Buddhism was essential to be a complete Buddhist. Likewise," His Holiness said. He urged the Ladakhis to ensure that the Jokhang Temple should also become a center of learning.

The Tibetan spiritual leader noted that in the report of the Ladakh Buddhist Association that was presented to him, Muslims from Kargil had been invited to the Jokhang for a religious exchange. He also praised this effort.

He advised the responsible persons that occasionally during some religious holidays, it would be good to organize seminars and discussions among Buddhists, practitioners of different faiths, and even non-believers.

"In the present world, in places like Syria, Iraq and Afghanistan, there was much violence and killing in the name of religion," the Tibetan leader said, adding: "As believers, it is morally wrong to remain indifferent to this suffering."

The nobel peace prize laureate also stressed that everyone had a responsibility in promoting more understanding among different religious traditions which could then lead to a more peaceful world.

His Holiness also expressed solidarity and offered his condolences to the families of the victims, to France and the Catholic Church. He made the comments during meetings with a tourist from Nice over the tragedy that struck France on his way to the Jokhang Temple in Leh, on July 27.