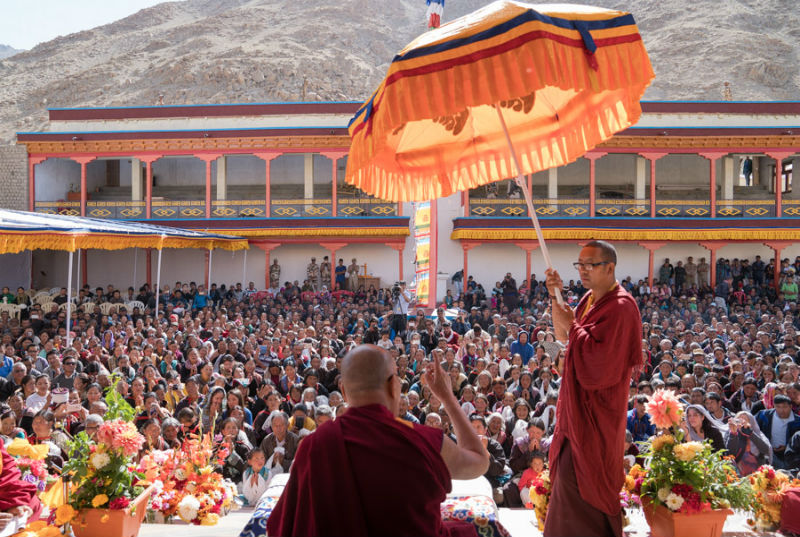 Leh, Ladakh, J&K – His Holiness the Dalai Lama spoke about Buddhism and faith at his public speech at the Dakthog Monastery in Ladakh.

The spiritual leader of Tibet encouraged his audience to start practising the Buddhist faith by analysing the Buddha’s teachings through study, reflection and meditation.

After the greetings, mantras, consecrations and offerings, His Holiness spoke to a large number of locals and westerners, who had gathered at monastery. He began by introducing the Guru Dorje Doloe statue, built by the late Taklung Tsetul Rinpoche, the previous head of the Nyingma Buddhist tradition of Tibet. He said, “The Dorje Doloe statue here in Ladakh was built to help the spiritual and temporal affairs of the Tibetan cause. We have commissioned similar statues in Arunachal Pradesh, Sikkim and somewhere in a border area.”

His Holiness revealed to the public that he had just finished his week long retreat at Dorje Doloe and, as the concluding practice, he came to Dakthok for a Ritual Feast Offering. His Holiness had no plans to meet the public but decided otherwise because, as he mentioned, “so many of you have come here so I wished to say hello to you.”

“Your faith has brought you here. But in Buddhism mere faith is not sufficient. It emphasizes a faith born of critical discerning faculty of intelligence!” His Holiness went on to say that the Buddha himself emphasized the need for critical analysis of his teaching:

Oh Bhikshus and wise people,
just as a gold is tested by burning, cutting and rubbing,
you should check my teaching thoroughly and then accept it.
But not because of your devotion to me!

His Holiness pointed out that in contrast to all the founders of the many religions in the world, the Buddha is the only one who asks his followers to examine his teachings, rather than accepting it out of mere faith and devotion.

When talking about the importance of using reason and logic to delve into the depths of the Buddha’s teachings, His Holiness spoke about the three aspects of phenomena — the obvious/manifest, the slightly hidden and the very hidden objects of knowledge — and said that the inferential logic, which is used to gain insight into the slightly hidden phenomena, such as emptiness, needs to be based on the empirical experience of the obvious phenomenon, such as the coarse level of cause and effect, which is recognised by our sensory perception. He adds that, by verifying the truth of the Buddha’s teachings pertaining to these two aspects of knowledge, we can infer the truth and the infallible nature of his teachings on the hidden phenomena, such as the law of cause and effect or karma.

In connection with the idea of using reason and experiment to find the truth of the Buddha’s teachings, His Holiness referred to his fruitful discussions with modern scientists, who even though are not religious, use rigorous methods of investigation to understand reality. Contrary to the opinion of many of his western friends, who warned him against such interactions, he initiated debates with western scientists and today states, “After holding dialogues with modern scientists for over 30 years, I feel I have come out the winner!”

In his speech, His Holiness focused on the threefold understanding and wisdom gained through study, reflection and meditation, activities that work together in progression. He told the audience that the 300 or more volumes of Kagyur and Tengyur literature are meant for our pursuit of knowledge, aiding us, through inferential logic, to build our convictions of the Buddha’s teachings. Further on, through meditation, this reflection is then transformed into experience. Our faith in the Buddha’s teachings is grounded on the correct knowledge of Buddhist philosophy through critical examination and reason.

To conclude, His Holiness told the audience, “I have reached 81 but I still study and contemplate on texts from the Kagyur and Tengyur and others whenever I have spare time”. His Holiness stated “It goes without saying that the younger generation must study and learn the teaching of the Buddha. Even the older people must study the teachings, as Sakya Pandita says:

You must learn knowledge even if you were to die tomorrow.
You may not become a scholar in this very life
But as if taking your own wealth deposited [in a bank]
You would be drawing on it in the next life.

He said he will be giving more detailed teachings in the weeks to come and said goodbye to the gathering. After shaking hands with the eager members of audience, he returned to his residential palace in Shewatsal Phodrang.