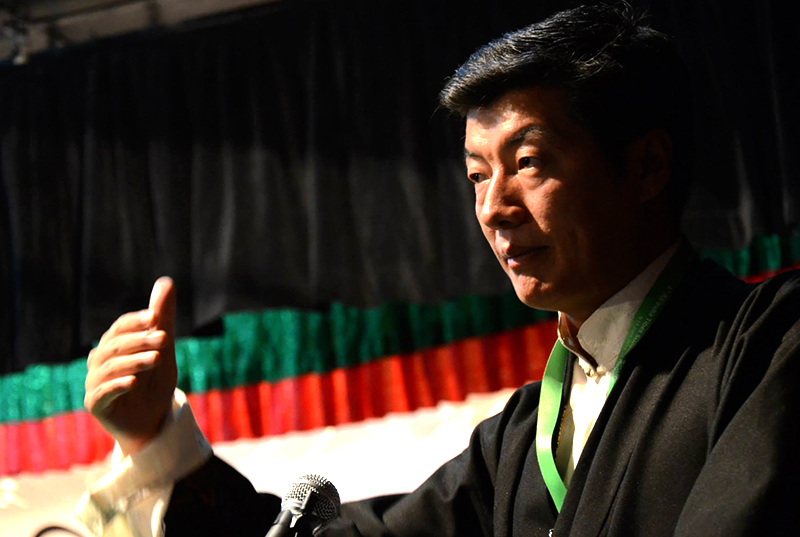 In a letter addressed to Mr Matteo Renzi, Prime Minister of Italy, Sikyong said "it is heartbreaking to hear about the devastating earthquake in central Italy and we are deeply saddened by this bad news."

"On behalf of every Tibetan in and outside Tibet, I would like to convey our heartfelt condolences to the people of Amtrice, Accumoli, Arquata del Tronto, Pescara del Tronto and all those who are undergoing the tragic and traumatic experiences due to this disaster."

"Italy has been a great support for the cause of Tibet and the Tibetan people. Therefore, we stand in solidarity and express our deepest sympathies to all those affected by the calamity. We pray for an early recovery of the injured," he said.

Pope Francis has skipped his catechism lesson during his Wednesday general audience and instead led pilgrims in praying the rosary for the victims of Italy's earthquake. Holding a rosary in his right hand, Francis told the crowd that he was stunned by the devastation of the magnitude 6 temblor that struck central Italy early Wednesday. He said he wanted to express his pain and solidarity with the victims.

In a letter to Italian PM, Matteo Renzi, His Holiness the Dalai Lama, the spiritual leader of Tibet His Holiness offered his "condolences to those that lost members of their families, friends and their homes in the tragedy". "As a token of solidarity with the people of Italy, His Holiness asked the Dalai Lama Trust to make a donation towards rescue and relief efforts." it added.

President Obama has called Italian president Sergio Mattarella in order to express his condolences following the disaster. Obama allegedly told Mattarella the USA is ready to offer what help and support it can to Italy.
Chancellor Angela Merkel expressed "the deep sympathy of the German people" in a message Wednesday to Italian Premier Matteo Renzi. She wrote that "the pictures of the devastation are shocking."

French President Francois Hollande is offering Italy "all the help that might be necessary" after the deadly earthquake in Umbria. Calling it a "terrible tragedy" in a statement after a special security meeting Wednesday, Hollande offered the support of "all the French people." He didn't elaborate on what help France is offering.

Indian Prime Minister Narendra Modi today expressed sadness over the loss of lives in Italy due to an earthquake. "Saddened by the loss of lives due to a quake in Italy. Condolences to bereaved families & prayers with those injured," he tweeted.

The European Union's top crisis management official says Italy has requested satellite images of earthquake-hit parts of the country as Rome tries to establish the scope of the damage.

Commissioner Christos Stylianides said Wednesday that the EU emergency response center is in contact with Italian civil protection authorities to see what additional help might be required. Stylianides conveyed the EU's condolences and expressed solidarity with Italy, saying that its "thoughts are also with the first responders and all those involved in the rescue operations."

"Our thoughts and prayers are with the people of Italy, especially the family and friends of those affected."

At least 120 people have died after a powerful earthquake struck a remote area of central Italy on Wednesday, said Prime Minister Matteo Renzi, warning that the figure could still rise.

Some 368 people were injured in the tremor, he said at a press conference in the Rieti region, not far from the epicentre of the 6.0-6.2 magnitude quake.