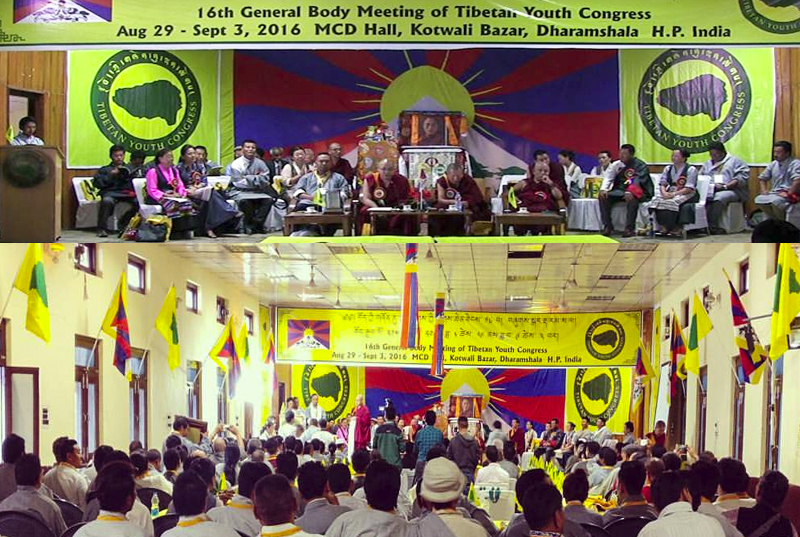 TYC earlier said that the meeting will "deliberate and discuss all the different issues pertaining to the cause and the organisation," which means that come up with recommendations that will lead to a better, healthier, merrier the organization in exile working for the Independence of Tibet.

"It is very clear that unity is our strength and division among ourselve is the defeat, based on your past experiences," TYC President Tenzing Jigme said, while delivering his speech at the opening session of the 16th GBM.

The Speaker of the Tibetan Parliament in-Exile (TPiE) Khenpo Sonam Tenphel, was the chief guest of the inaugural function said: "As community, naturally, different viewpoints are necessary, whether personally endorsing for the middle-way policy or independence for Tibet, but respecting each others' opinions is important if those are mutually beneficial for Tibetan people and the future of Tibet."

At the meeting, which was attended by around 200 people, mostly delegates from 40 TYC regional chapters all over the world. Amongst guests were former TYC executive members, Tibetan Parliamentarians, local representatives and the TPiE Deputy Speaker Acharya Yeshi Phuntsok.

Former minister Kirti Rinpoche, was also among guests, said that 'TYC is not only for exile. TYC should try to represent the aspirations of all Tibetan youth, both inside Tibet and in exile. He also added that TYC decisions should not made by few executives or members in exile, but by collecting the views and voice from youth inside Tibet'.

This years GBM will be held at the MCD Committee Hall, Kotwali Lower Dharamshala from Aug 29 – Sept 3 2016. The meeting will also hold elections for the office of its Central Executive Committee. The members will also elect the new executive members of the organization who will serve for a term of three years.

The GBM, held every three years, is the highest policy making body of the Tibetan Youth Congress. Founded in 1970, TYC is an international non-governmental organization that advocates the independence of Tibet from China. With around 30,000 members in the Tibetan diaspora and 81 regional chapters worldwide, TYC is the largest and most active non-governmental organization of Tibetans in exile.