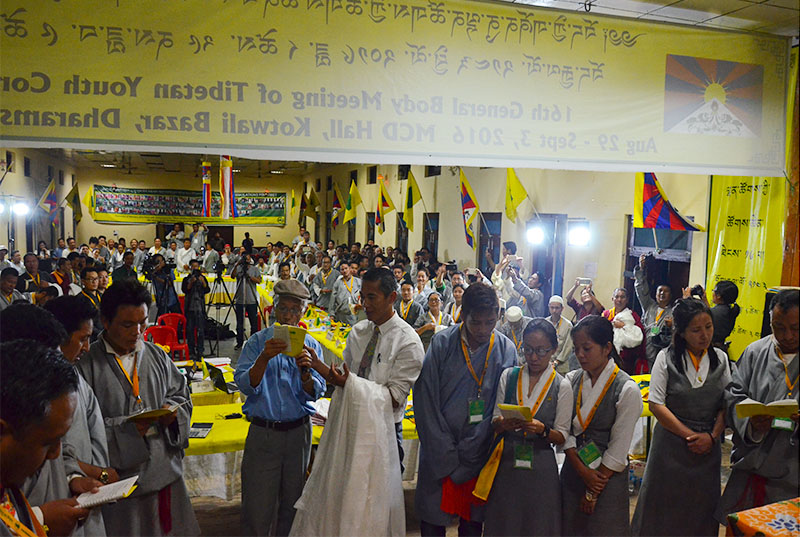 Dharamshala — Delegates from the Tibet Youth Congress were granted a special audience with His Holiness the Dalai Lama at his residence, after they ended the weeklong 16th General Body Meeting on Saturday, saying there is no change needed for the political ideology to seek complete independence for Tibet.

Tenzing Jimge of Minnesota, USA was re-elected the new President of the Tibetan Youth Congress (TYC), the largest Tibetan non-governmental organisation in exile, at the concluding day of the 16th General Body Meeting (GBM).

Delegates from 40 TYC regional chapters all over the world gathered here to represent their respective regions in the 16th GBM, which began on August 29. On Sunday, all delegates had the opportunity to have a special audience with His Holiness the Dalai Lama who emphasized the importance of Tibetan youth and TYC as an Organisation and needs for more female role in TYC.

Mr Jigme, who proved one of the strong candidates for the TYC Central Executive Committee, the highest office of the organisation, headquartered in the northern Indian hill town of Dharamshala, received majority vote in final presidential election.

Mr Jigme and his team of nine members will serve the office for a another term of three years. Tamding Hrichoe from Pokhara Jampaling, Nepal, was re-elected Vice President, while Tashi Lamsang from Dharamshala re-elected the General Secretary.

Mr Jampal Choesang, the former Chief Election Commission of the Central Tibetan Administration administered the oath of Office and Secrecy to the elected members. Mr Choesang also conducted the election, on Saturday, in Dharamshala.

"We strongly condemn and reject the baseless allegations against our spiritual leader His Holiness the Dalai Lama, carried out by any organizations and individuals,"  Mr Jigme said in his acceptance speech.

Mr Jigme also vowed to continue the freedom struggle of the Tibetan people and ensured that the members take intitative to maintain the TYC identity in the struggle for freedom.

The meeting passed a 22 point resolution on the last day of the meeting, strongly focused mainly on strategies to enhance the unity of the organization and also reviewed works that highlighting the current situation in Tibet. The annual reports and financial statements of the TYC and its regional chapters, were presented and reviewed.

Important agendas concerning relevant revisions of the TYC charter, strategic activities for freedom struggle, His Holiness' security, preserving Tibetan culture, language and environment were tabled and deliberated upon. The 16th GBM also came with a decision that TYC should continue to stand for a fully independent Tibet after the majority showed support through the democratic process.

The GBM is the highest decision making body of TYC, and it alone is empowered to elect the CENTREX members and amend TYC’s written Constitution. The body elects not less than 10 members for the central committee.

The delegates spent nearly a week in the exile capital, where they had the opportunity to tour the major Tibetan institutions, include the Central Tibetan administration and the Tibetan Parliament in-Exile, to learn more about the Tibetan political system.

The excutive members are normally required to work in TYC’s head office based here in Dharamshala, the seat of the Central Tibetan Administration.

TYC was founded on October 7, 1970 in Dharamsala with the sole objective to restore Tibet’s lost independence claims over 30,000 members with 81 regional chapters around the world.

Tibet was invaded by Communists China, starting in 1949. Since that time, over 1.2 million out of six Tibetans have been killed, over 6000 monastaries have been destroyed— the acts of murder, rape and arbitrary imprisonment, torture and cruel, inhuman and degrading treatment were inflicted on the Tibetans inside Tibet.

His Holiness the Dalai Lama fled Tibet in 1959 amidst a mass Tibetan uprising on 10 March in Tibetan capital Lhasa against Communist China's continuing presence in Tibet.