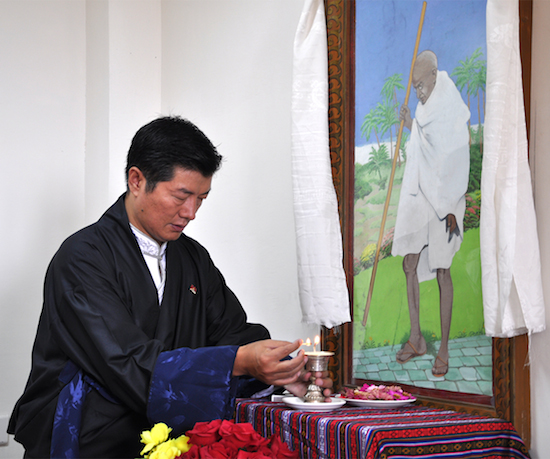 Dharamshala—Sikyong Dr Lobsang Sangay, elected Prime Minister of the Tibetan people, today pledged to a commitment of non-violence on the occasion of Gandhi Jayanti, the birthday of world renowned Mohandas Gandhi.

A brief ceremony, attended by members of the government and senior officials, was held at the Kashag secretariat to celebrate the occasion.

“Gandhi Jayanti is an auspicious day. Gandhiji is the father of the very successful Indian freedom struggle. His views on morality and ethics still resonate with the consciousness of humankind. Therefore, we Tibetans join in this celebration,” he told media persons.

“Today is also the international day of non-violence as per a resolution passed by the UN General Assembly on 15 June 2007. Following the leadership of Gandhiji, we pledge non-violence as envisioned by His Holiness the Dalai Lama to resolve the Tibet issue,” the Prime Minister asserted.

He further outlined non-violence as the key to resolve all conflicts and urged Tibetans to imbibe the messages of peace and positivity to move forward in the struggle.

Employing non-violence and peaceful agitations against the British Raj, Gandhiji led India to independence and inspired movements for non-violence, civil rights and freedom across the world during the first half of the 20th century.

Mohandas Karamchand Gandhi, popularly known as Mahatma Gandhi was born in Porbandar, Gujarat on 2 October 1869 and was assassinated January 30th, 1948.