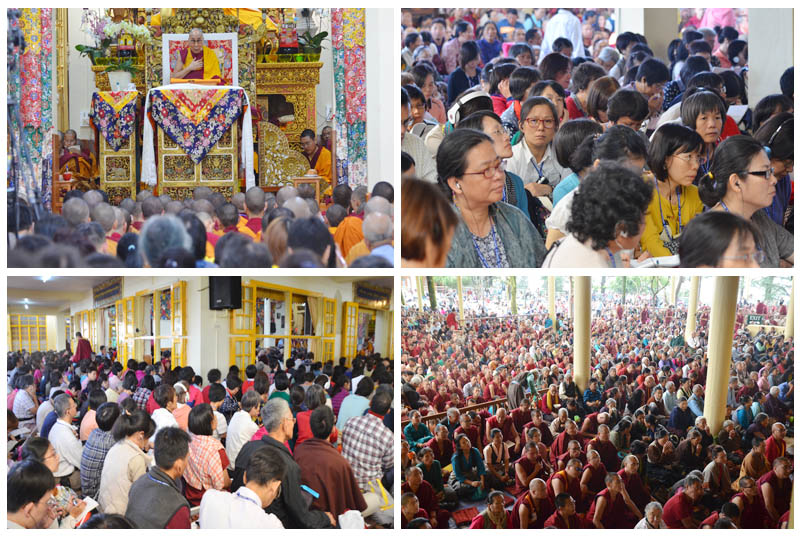 Dharamshala — The early morning of Monday, October 3rd was lit with excitement as nearly 6000 people flowed into Tsulakhang, the main temple in Dharamshala waiting for His Holiness the 14th Dalai Lama, spiritual leader of Tibet, to begin his teaching.

The four day teaching, on Aryadeva’s Four Hundred Stanzas on the Middle Way, is being held at the request of a group of a thousand students from Taiwan, many of them students from the late Tenzin Jamchen. Besides the Taiwanese, 1650 foreigners are attending the teaching in addition to local Tibetan and Indians.

Taking his seat on the throne inside the inner temple, His Holiness began, “Buddhism reached China before it was brought to Tibet, which makes the Chinese the senior students, while Tibetans and Mongolians are junior students. However, I think I can say that the junior students’ level of knowledge is not bad and we are all followers of the same Nalanda tradition. You students from Taiwan have been coming here to listen to teachings for many years and I’m happy to see you again.”

“The text we are going to look at comes from the Nalanda tradition. Aryadeva is the principal spiritual son of Nagarjuna. I received transmission and explanation of the text from Khunnu Lama Tenzin Gyaltsen from whom I received all 13 great classic Indian texts. I also received it from Khunnu Lama Rigzin Tenpa and from Serkhong Tsenshab Rinpoche. Khunnu Lama Tenzin Gyaltsen was a scholar of Sanskrit, which further enriched his explanation. Although I haven’t received a transmission of Chandrakirti’s commentary, that’s the one I’m relying on.”

Expressing admiration and support for the improved awareness among the Indian population, His Holiness said, “the study of Buddhist philosophy, particularly the Nalanda tradition are Indian ancestral tradition. Buddha himself was an Indian. The great Nalanda tradition was first spread in India. Therefore it is in the primary interest of Indians to preserve their heritage, religion and culture.”

His Holiness observed that in ancient Indian traditions negative emotions were regarded as faulty, but they are not eliminated simply by reciting mantras. Since they are rooted in ignorance, we have to overcome ignorance. This is the intention of the Perfection of Wisdom sutras---the 25 line version of which is popularly known as the Heart Sutra.

Regarding the rise of conficts and humanitarian crises around the world, His Holiness observed, "If world situation continues to remain same, it is going to be unfortunate. Around 200 million people have been killed in all kinds of war and many are starving right this moment. These disturbances are caused by men and therefore mankind should find a solution to these problems. Prayers are not the antidote to the man-made problems.”

In order to combat these problems, His Holiness asserted that we need to exploit our inner love and compassion, despite religious or other differences. “Whether you are a believer or non-believer, follower of theistic religion or non-theistic, If we all think for the better of seven billion human being, we as individuals would automatically benefit.”

After a question and answer session where he fielded questions from several of the Taiwanese students, His Holiness briefly introduced Aryadeva’s Four Hundred Stanzas, reading the first verse, which focuses mainly on impermanence. Reflecting on how all the world around is grossly impermanent, he maintained that understanding this impermanence can help to combat ignorance.

Closing for the day, His Holiness joked with the Taiwanese students as he said 'let's eat lunch' in Chinese, which was met with great laughter.

He will start the bulk of the teaching on the Four Hundred Stanzas from Tuesday morning, and the teaching will last a total of four days.