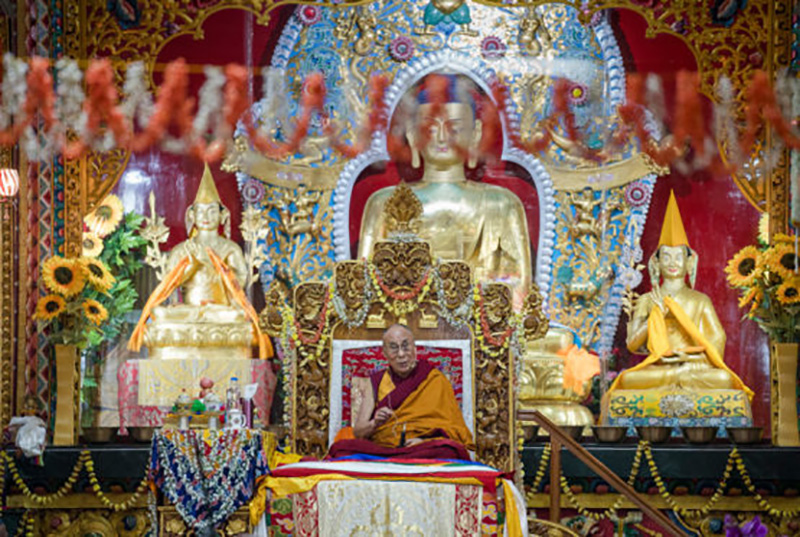 Mundgod — The morning of December 21st began early as His Holiness the Dalai Lama, spiritual leader of Tibet, arrived at the assembly hall of Drepung Lachi Monastery to the rumbling of horns blowing to commemorate the 600th anniversary of Drepung Monastery's founding.

The Ganden Tripa, Ganden Trisur, Sharpa and Jangtse Chöjeys, with the Drepung Abbots and about 1500 monks, led by the thunderous voice of the chant-master, offered His Holiness a Long-Life Ceremony. At a certain point the Nechung Oracle appeared and during a long trance paid homage to the eminent Lamas and approached His Holiness several times.

His Holiness told the assembly, “Since we are celebrating the founding of Drepung Monastery by Jamyang Chöjey Tashi Palden, I’d like to say a few words here. This Long-Life Ceremony was different from those routine rituals performed when, as a child, I was facing an inauspicious year, because the whole community has been involved.

“As a child I was placed on the throne of the Dalai Lamas and I feel I have a karmic connection with them that goes back to Trisong Detsen. At this crucial juncture in our history I feel I’ve been able to make some contribution to the Tibetan cause and the welfare of our religion and our people.

“The recent Symposium held here revealed that we now have monks and nuns who have acquired quite a high standard of modern education in addition to their traditional training.

“You’ve made prayers and I also pray that I’ll live long. If no one were to listen to what I have to say, there would be little point, but I’ve made suggestions and you’ve followed the advice. You’ve worked and studied hard so if the Bodhisattvas and the 17 Masters of Nalanda were to look to see what we’re doing I think they’d be satisfied that we are keeping our traditions alive.

“Nechung insists that I should live to 108 and that sounds auspicious, but whether the Lama lives long depends on the conduct of the disciples. Please keep up your studies.”

Before His Holiness's keynote address, more than 700 Geshes, were awarded their certificates for their high studies, having earned their degrees in 2012-2015.

His Holiness then began, “My Dharma brothers and sisters, what is the purpose of your studies? Not the attainment of name and fame, but, as the mantra of the Heart Sutra tells us, to progress through the five paths and the Bodhisattva grounds. Je Rinpoche said, ‘I studied, I reflected on what I learned and I put that into practice. And what I’ve done I’ve dedicated to the flourishing of the Dharma.’ This is what you too should do. The purpose of study is to tame the mind to soften up and reduce our disturbing emotions prior to eliminating them altogether.

“After you study the thing to do is engage in the practice of meditation as Trehor Kyorpon Rinpoche has done—keeping the Dharma alive through learning and practice. Gendun Drup similarly spent time as a hermit at Jangchen Ri before coming down to establish Tashi Lhunpo.”

Referring to the recent science Symposium, His Holiness expressed satisfaction that there are now monks and nuns who have acquired the two wings of modern as well as traditional education. He said this is consistent with the Buddha’s advice to examine and test his teachings as the wise test gold, rather than just taking them for granted because he gave them.

“As far as studies are concerned I have been able to exert some influence. Forty years ago I encouraged the nuns of Geden Chöling to begin to study philosophy. They did and others followed. Now, for the first time nuns will be awarded Geshe degrees. When it was first known that nuns were going to study, there were some old monks who were reluctant about it. Later, when they were ready to receive degrees some monks resisted. I argued that if they had completed the study—and many have studied for 20 years or more—they should receive the reward. I want to repeat that the study of logic and philosophy is very important. “

The Abbot of Gomang Monastery finally proposed a vote of thanks, thanking the various dignitaries and guests for attending the occasion. He called on Nechung to continue to protect the monastery and its monks. He concluded with the wish that His Holiness and the great masters live long for the benefit of all sentient beings.