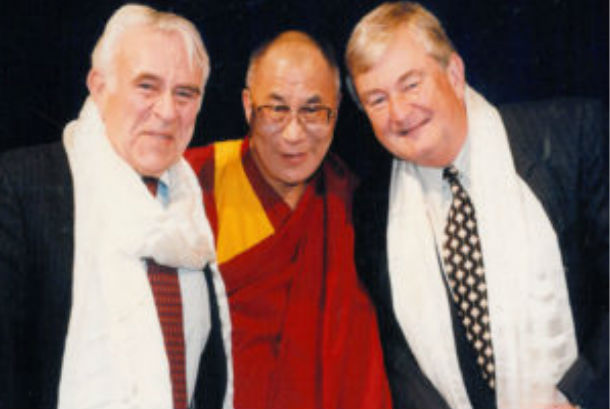 "On behalf of the Central Tibetan Administration, I offer my deep condolences at the demise of Congressman Benjamin Gilman, a true and loyal friend of Tibet and the Tibetan People," said Dr Lobsang Sangay, the Sikyong of the Tibetan Government-in-Exile.

"As Chairman of the House International Relations Committee, he was instrumental in regularly convening policy discussions on Tibet and introduced or helped pass key landmark legislation relating to Tibet," Sikyong said.

The PM further said that Mr Gilman "was also behind the successful third World Parliamentarians Convention on Tibet in Washington, D.C. in April 1997. He regularly met His Holiness the Dalai Lama and leaders of the Central Tibetan Administration to discuss the situation inside Tibet."

"For his contribution towards the Tibetan movement, His Holiness the Dalai Lama presented him the 'Light of Truth' award. The Tibetan people hold him in regard and will always be remembered for his compassionate stand on Tibet," Sikyong added.

The Deputy Speaker of the Tibetan Parliament-in-Exile also expressed his condolences at the demise of US Congressman Mr Benjamin Gilman. "We are deeply saddened at the demise of your great husband and Tibet's long-time friend Mr Gilman. While it is an irreparable loss for us, no words can describe this tragedy to you and your family," says Acharya Yeshi Phuntsok's condolence letter to Mrs. Georgia Gilman.

"In 2003, His Holiness the Dalai Lama bestowed upon Congressman Gilman the International Campaign for Tibet's Light of Truth Award at Washington D.C., for his outstanding contributions to the public understanding of Tibet and the plight of the Tibetan people," Ven Phuntsok said, adding: "We the Tibetan will forever remember his support and solidarity for the Tibetan cause."

Benjamin Gilman represented New York’s 20th congressional district for more than 30 years. From 1995 to 2002, he served as Chairman of the House International Relations Committee (now renamed as House Foreign Affairs Committee) and from his position regularly convened policy discussions on Tibet and introduced or helped pass key landmark legislation relating to Tibet, working with his colleagues in the House Charlie Rose, Tom Lantos, John Porter, Nancy Pelosi, Chris Smith, Frank Wolf, and others.

During a Hearing on the Status of Negotiations between China and Tibet in April 2000, one of many such hearings that he convened on Tibet as Chairman of the House International Relations Committee, Congressman Gilman explained his interest saying, “The Tibetan cause enjoys the global support that it does because it is a courageous attempt by a Nation and a people who are trying to regain what is rightfully theirs by throwing off the repression of colonization. It is in the interest of international stability to have Tibet once again serve as it had for 2000 years as a buffer zone strategically placed between India and China.”

He also hosted the third World Parliamentarians Convention on Tibet in Washington, D.C. in April 1997, participated by members of Parliament from several countries. Congressman Gilman visited Dharamsala in August 1997 and during that visit he met the Dalai Lama and representatives of the Tibetan leadership.

In 2003, following his retirement from Congress, the Dalai Lama bestowed upon Congressman Gilman the International Campaign for Tibet’s Light of Truth Award, at a special event in Washington, D.C., for his outstanding contributions to the public understanding of Tibet and the plight of the Tibetan people.

Congressman Gilman is survived by his wife Georgia, three children from his first marriage; two stepchildren; and 11 grandchildren. He was a New York congressman for 30 years, first elected to the House of Representatives in 1972, Mr Gilman was a moderate Republican who focused on foreign affairs throughout most of his years in Washington.

Mr Gilman was an assistant New York State attorney general in the 1950s, then a lawyer in private practice. He was a New York assemblyman from 1966 to 1972. In 2003 and 2004, he was the United States representative to the 58th session of the United Nations General Assembly.