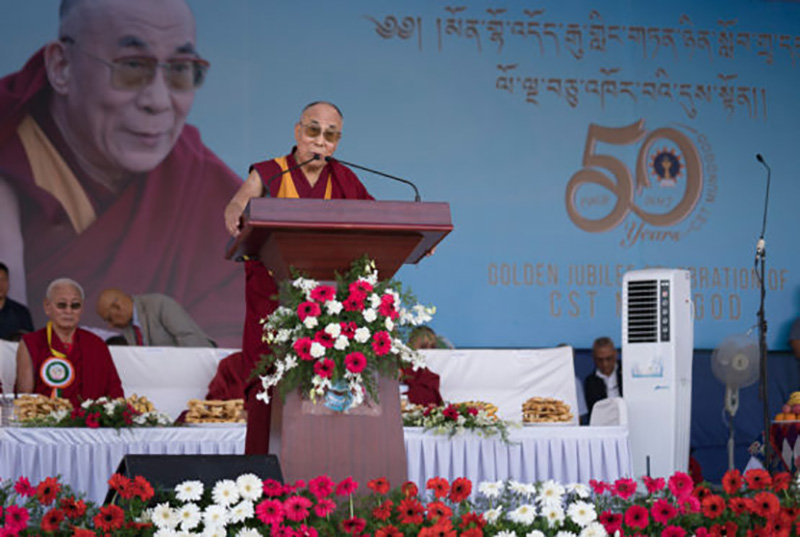 Mundgod — His Holiness the Dalai Lama graced the golden jubilee celebrations of the Central School for Tibetans (CST) Mundgod, on December 22nd, 2016, marking the 50th year since the school's founding.

Current students opened the ceremony with cultural dances and performances, in addition to the singing of both the Tibetan and Indian national anthems.

In his address, His Holiness the Dalai Lama emphasised the importance of education in rebuilding a nation and recalled Pundit Nehru, India’s first prime minister, for his contribution towards the Tibetan movement, explaining the important role Nehru had played in the establishment of Tibetan schools and education in India in the early days of exile.

His Holiness further recalled that in the early days of the founding of the school, Tibetans thought there would be an early resolution of the Tibet issue and that they would be able to return to Tibet soon.

Since the resolution of the Tibet issue is yet to happen, His Holiness reminded the Tibetan public that they have an additional responsibility to speak out in support of their brothers and sisters who are inside Tibet.

Speaking about the future of the Tibetan movement, His Holiness said that the future status of Tibet depends on the potential of the current generation of Tibetan children and urged them to study hard.

“You children at school today,” His Holiness said, “are the seeds of the future of Tibet.”

“The Tibetan people are historically quite focused on education if you study Tibetan history of the 6th and 7th centuries. This is evident as during that time Tibetans successfully invented a new script and was able to translate lots of Buddhist texts including the Kangyur and Tengyur into Tibetan,” His Holiness said.

Tibetan political leader Sikyong Dr Lobsang Sangay, spoke about His Holiness the Dalai Lama’s tireless efforts in establishing the Tibetan schools and settlements in exile and its significance in revitalising the Tibetan movement and culture.

Sikyong also noted that there are around 60 million refugees in the world, however he said that there are no others like Tibetans in terms of the unique educational opportunities available as a result of His Holiness the Dalai Lama’s vision and the Indian government’s assistance.

Mr C Ravindra Dran, current Principal of the school and Education Kalon Ngodup Tsering also addressed the ceremony, speaking about the development of the school from its humble origins and the contributions it has made to the larger Tibetan movement.