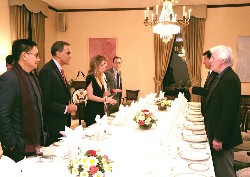 Dharamshala — Following a dinner hosted by outgoing US Ambassador Richard Verma at which Sikyong Dr Lobsang Sangay was among the guests, China has voiced objections of “interference” in Chinese affairs, and claimed that they are “against any contact” by governments with Tibetans in exile.

The dinner hosted by Verma on January 15th in honor of Hollywood actor and personal friend Richard Gere, was also attended by the Prime Minister, Dr Lobsang Sangay. The photo of the dinner shared by Indian Union Minister Kiren Rijiju on January 26th, showed PM Sangay among those sitting around the high profile dinner table.

Chinese Foreign Ministry released a statement following the event, stating, "No country in the world recognizes the so-called Tibetan government-in-exile." China is, “firmly against any country's official contact with it in any form, and resolutely opposed to any country's interference in China's internal affairs by using Tibet related issues as an excuse."

China routinely protests visits and meetings of Tibetan spiritual leader, the Dalai Lama and his associates saying it constitutes interference in its internal affairs.

In October last year, China objected to Verma’s visit to Tawang in Arunachal Pradesh which Beijing claims as southern Tibet, saying any interference by Washington in the Sino-India boundary dispute will make it “more complicated” and “disturb” hard-won peace at the border.