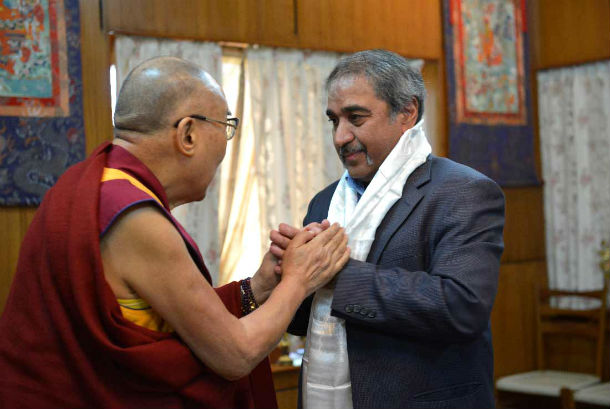 Washington, DC — The International Campaign for Tibet (ICT), a U.S.-based nongovernmental advocacy group Monday issued a statement on Chinese students objection to University of California San Diego’s invitation to His Holiness the Dalai Lama, saying "the Chinese Embassy and Consulates should not be allowed to interfere, directly or indirectly, in the academic decisions of American universities."

"The objections raised by the University of California, San Diego chapter of the Chinese Students and Scholars Association (CSSA) about the University’s invitation to the Dalai Lama to be its commencement speaker this year are without merit, and instead raise important issues of academic freedom in the United States, CTA said in a statement.

"The Dalai Lama is widely known in the United States and throughout the world for his message of peace, compassion, tolerance and understanding. It is clear that the CSSA is unfamiliar with the content of the numerous public speeches that the Dalai Lama has made in the United States, as they inaccurately accuse him of “spreading inflammatory, politically offensive speech,”" the statement said, adding: "We are pleased to see that other Chinese students disagree with the CSSA’s initiative."

It said that the issue should be of particular concern to all Americans, particularly to the State Department and the US Congress, as these Chinese students have publicly admitted that they are consulting the Chinese Consulate in Los Angeles on their campaign. The Chinese Embassy and Consulates should not be allowed to interfere, directly or indirectly, in the academic decisions of American universities."

"Over the years, China has been trying to influence American educational institutes, both through direct threats and financial incentives, to toe the Beijing line on issues like Tibet. One example of this is the establishment of the Confucius Institutes. Although the stated aim of the Confucius Institutes is to promote learning of the Chinese language and understanding of Chinese culture, we have evidence that the CIs are being used for dissemination of Chinese propaganda on issues like Tibet," it said.

"Some years back, the International Campaign for Tibet requested resource materials from a Confucius Institute at a U.S. university. What we received were books and DVDs giving the Chinese narrative on Tibet published by China Intercontinental Press, which is run by the State Council Information Office. A Xinhua report of January 10, 2012 confirmed that a journal published in Chinese by the official Tibetan Academy of Social Sciences was being “…mainly distributed to foreign embassies and diplomatic missions in China, as well as universities, research institutes and worldwide Confucius Institutes,”" the statement continued.

The statement then said that the New York Times on March 4, 2012, carried an article headlined “Critics Worry About Influence of Chinese Institutes on U.S. Campuses” in which it quoted Prof. June Teufel Dreyer, who teaches Chinese government and foreign policy at the University of Miami, as saying, “You’re told not to discuss the Dalai Lama – or to invite the Dalai Lama to campus. Tibet, Taiwan, China’s military buildup, factional fights inside the Chinese leadership – these are all off limits.”

It added: By objecting to the invitation to the Dalai Lama, the CSSA of UC San Diego is doing the work of the Chinese government. The University of San Diego’s invitation to the Dalai Lama is a reflection of the tremendous American public interest in, and support for, his thoughts and vision for the broader world; unfortunately, the CSSA is serving the short-sighted political agenda of the current Chinese leadership.

The University of California San Diego, one of the top 15 research universities in the world and recognized for its contributions to the public good, in partnership with The Friends of the Dalai Lama Foundation, recently announced that the spiritual leader of Tibet will offer the keynote address at the invitation-only UC San Diego All Campus Commencement June 17, 2017. His Holiness the 14th Dalai Lama will also speak June 16 at a second event, which will be open to the public. This will be his first 2017 U. S. tour stop.

“We are honored to host His Holiness the 14th Dalai Lama at UC San Diego and thankful that he will share messages of global compassion with our graduates and their families, as well as with a broad public audience,” said Chancellor Pradeep K. Khosla. “A man of peace, the Dalai Lama promotes global responsibility and service to humanity. These are the ideals we aim to convey and instill in our students and graduates at UC San Diego.”

Chancellor Khosla added, “We are grateful to Lama Tenzin Dhonden for making the visit of His Holiness to UC San Diego possible. In 2012, he spoke at our campus; we are so pleased that His Holiness will be here again in 2017.”

“This shall be a very special visit. San Diego loves His Holiness. His Holiness will come to San Diego to share an authentic message of peace and human value as the students enter their professional lives. The seeds of kindness and compassion shall sprout through their future work and spread these basic values throughout the world. Parents and members of the community will be able to share the celebration of graduation while receiving this message,” said Lama Tenzin Dhonden.