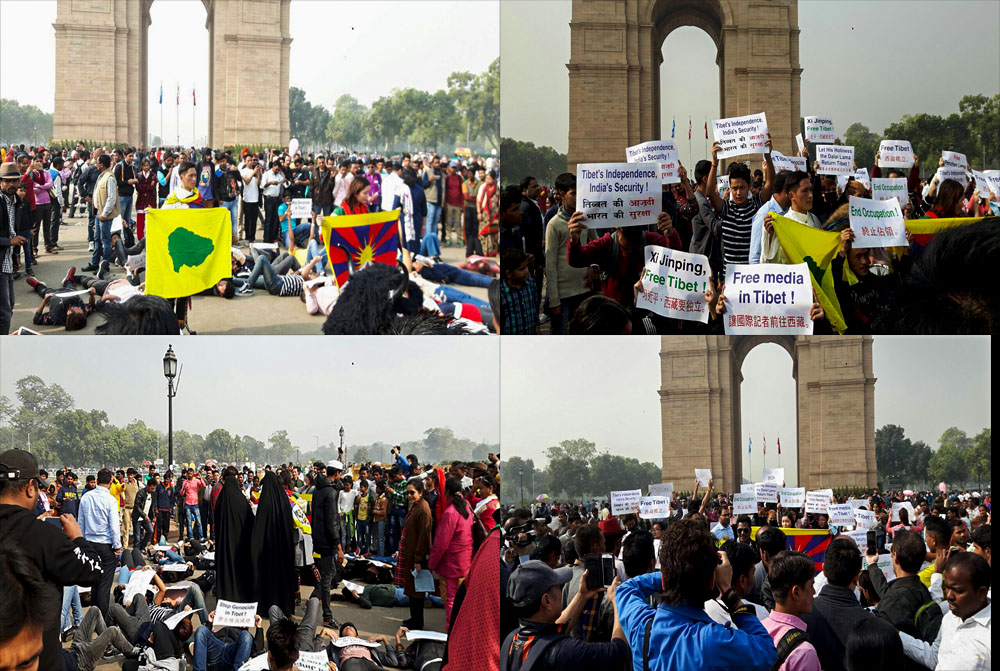 New Delhi — Tibetan activists protested in front of India gate in New Delhi, India, ahead of China's Minister of Foreign Affairs Wang Yi's visit to India for Russia-India-China (RIC) Foreign Ministers Trilateral meeting. During the RIC meeting, which will be held in the national capital on December 11, Yi will meet with Minister of External Affairs Sushma Swaraj and Russia's Sergei Lavrov.

New Delhi — Tibetan activists protested in front of India gate in New Delhi, India, ahead of China's Minister of Foreign Affairs Wang Yi's visit to India for Russia-India-China (RIC) Foreign Ministers Trilateral meeting. During the RIC meeting, which will be held in the national capital on December 11, Yi will meet with Minister of External Affairs Sushma Swaraj and Russia's Sergei Lavrov.

To protest against the illegal occupation of Tibet by the Communist Chinese Government and the continued violation of Human Rights in Tibet, Tibetan activists shouted slogans, carrying the national flag of Tibet and banners demanding 'Xi Jinping Free Tibet', 'End Occupation' and 'Free Media in Tibet' among others.

The TYC's statement said that "Despite the high-profile diplomatic reception accorded to him, the fact remains that he represents the regime that today rules China out of sheer military might without public mandate, unleashing a reign of terror, denying freedom and human rights to its people, leading to unparalleled genocide of over 70 million Chinese including 1.2 million Tibetans".

The statement continued, "The regime that illegally occupied Tibet, Mongolia, East Turkistan and Manchuria, continues to unleash great terror, atrocities and destruction violating all international laws with total impunity. In short, Wang Yi, is a Chinese leader with the blood of million murders on his hand, worthy only of bringing to justice for crimes against humanity."

"As a Chinese leader, he is also responsible for grossly hurting the sentiments of millions of Tibetans and the Buddhist the world over through constant vilification of their spiritual leader His Holiness the Dalai Lama despite His sincere effort for negotiation and compromise," the TYC added.

"In stark contrast to Chinese propaganda claims, Tibet under its draconian rule is undergoing the worst period of its history. Despite China's lofty claims of having liberated and developed Tibet, mass uprising including spates of self-immolations in protest against China happen all over Tibet. And China continue to deny basic human and political rights to the Tibetans, imposing restrictions on their cultural and religious activities, restrictions on their movement and access to information and expressions, restrictions on learning Tibetan language and denying access to justice etc," the statement said, adding that "Tibetans were constantly subjected to arbitrary arrests, severe torture under detention, long term sentences and capital punishment for simply exercising their basic human rights and aspirations in a peaceful way."

"Such repressive policies have resulted in the growing resentment against the Chinese government, leading to massive protests and spates of self-immolations. Already 151 Tibetans have self-immolated since 2009. These Tibetan protestors have called for the 'Return of His Holiness the Dalai Lama to Tibet', 'Independence for Tibet' and 'Preservation of Tibetan Religion, Culture and Language'. Sadly, all these efforts are being met with more and more harsh repressions by the Chinese Government instead of reforms and solutions."

The largest pro-independence group in exile in their statement said: "Consequently, China's repressive rule in Tibet over the last 60 years and its continuous and determined rejection by the Tibetan people in Tibet had revealed the basic truth that only an Independent Tibet could be the lasting solution for the Tibetan crisis."

TYC said they "respect the Government of India's sincere effort for reconciliation and the purpose of hosting such Meetings, which are touted as major vehicle to resolve bilateral issues and enforce economic relations between the countries. And TYC certainly concur with the statements of our fellow Tibetan leaders that an improved Sino-India relation is a welcome proposition for the Tibetans, for it would enhance India's scopes for effective intervention in resolving the Tibetan issue with Beijing. However, despite hopes and efforts for friendship and reconciliation, the painful truth of China's unending anti-India containment campaigns must not be forgotten and ignored. Experts' indictment of China as the single biggest obstacle for India's rise to power and prosperity is not without base."

TYC also said ""they further stress upon the fact that a true potential for a lasting peace, trust and friendship between India and China can be realized only through a just and early solution of the Tibet cause. Tibet is, without doubt the only magic key that could unlock the long-drawn out mystery of Sino-India deadlock. Thus far, Governments and policy maker's effort to find other alternatives have failed drastically. And India can only further ignore this reality at its own peril."

India rigorous efforts to assert global and regional leadership for India will be taken seriously if only India could deal effectively with China over Tibetan issue and else. While it is indisputable that a policy of a country is driven more by a national interest and pragmatism, it is imperative that those policies be primarily based on reality and facts rather than false expectations and gimmicks. And the just resolution of the Tibet issue is in the national, strategic and long term interest of the India. We therefore implore that the Government of India, while dealing with the China, will not take any measure that may go against the interest and aspirations of the six million Tibetans living in and out of Tibet.

TYC further added that "it is emboldened by the recent campaigns and statements of support for 'Independence for Tibet' and 'Boycott of Chinese Goods' by major Indian Organizations and Public. We recognize this as continuation of India's ancient tradition of support for freedom and peace the world over. We trust that this support would eventually be reflected in the mainstream policies of Government of India as well."

The Office of TYC Central Executive Committee further said that "Tibetan Youth Congress reiterates its stand for a complete Independence of Tibet and urge the Indian Government to talk Tibet with the Chinese counterpart. We further strongly condemn the visit of the Chinese Foreign Minister Wang Yi."