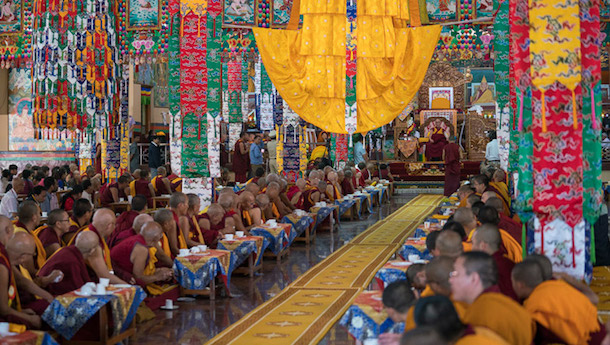 A view of Sera Lachi Assembly Hall during the welcome ceremony for His Holiness the Dalai Lama in Bylakuppe, Karnataka, India on December 19, 2017. Photo by Tenzin Choejor

Bylakuppe, India — "I caught a heavy cold that left me feeling too tired. I rested for a couple of days and have almost completely recovered. But I'm fine, don't worry," His Holiness the Dalai Lama Tuesday told a crowd of thousands of devotees at Sera Monastery in Bylakuppe, South India.

His Holiness the Dalai Lama arrived at Sera Monastery in Bylakuppe, South India from Ganden Monastery in Mundgod. Monastics and lay-people lined the road out of Mundgod Settlement to see him off, while several Abbots accompanied him for several kilometres down the road. Thousands of Tibetans, monks, nuns and lay-people, school-children among them, thronged the final stretch of the road to greet him. In the Sera Lachi Monastery yard the Ganden Throneholder, the Sharpa and Jangtse Chöjeys and Abbots, as well as a troupe of dancers from the lay community, were waiting to give His Holiness a warm welcome.

Inside the temple His Holiness paid his respects before the symbols of enlightenment, exchanged words with old friends and sat on the chair prepared for him. Tea and ceremonial sweet rice were served while prayers to the Sixteen Arhats and the Six Ornaments and Two Supremes were recited.

"I'm happy to be here again in one of Tibet's centres of learning that for centuries has been keeping our rich cultural traditions alive," His Holiness told the gathering. "I've known many of you for a long time—I greet you all.

"My original plan was to give monastic ordination here, but I caught a heavy cold that left me feeling too tired. I rested for a couple of days and have almost completely recovered. Before leaving Mundgod I taught the 'Three Principal Aspects of the Path' at Ganden. I meant to teach for an hour and a half, but by the time I was done I discovered two and a half hours had passed.

"Tomorrow I'll give the Hayagriva empowerment at the Sera-jey Courtyard and the day after that, in addition to inaugurating the new Sera-mey Debate Yard, I'll explain Je Rinpoche's 'In Praise of Dependent Origination'.

"The way for me to overcome fatigue is to sleep. Last night I slept soundly for ten hours. I get up at 3 in the morning and by 5 or 6 in the evening I'm ready for bed again. In his 70s Tagdrag Rinpoche used to suffer from insomnia, but that's not a problem for me. As I told people in Ganden, I am 82, nearly 83 years old, but I'm fine, don't worry.

The 82-year-old Nobel Peace Prize Laureate was speaking on revival of ancient Indian Knowledge in Bylakuppe, South India. Through his talk session that followed, the Dalai Lama harped on the need for inner peace to resolve problems.

"Recently I've been talking more and more about trying to revive an appreciation of ancient Indian thought in India and people seem to be responding. The way I think is derived almost entirely from the writings of the 17 Nalanda Masters. What they tell us about the workings of the mind and so forth remains very relevant today. It's not just up to me to share this understanding with others; everyone else who participates in this knowledge can contribute to the project too.

"Right from the start, Shantarakshita established a mode of study in Tibet based on logic and reason. Now we should look into how to revive this approach here in India. Since India is one of the world's free democratic nations, a secular, academic revival of ancient Indian knowledge here could eventually have influence right across Asia.

"When we first came into exile, monks continued their studies in the camp at Buxa. In due course, the major centres of learning we re-established in the new Tibetan settlements and programs of study were reinforced. This is how we've kept the Nalanda Tradition alive. Many different schools of thought flourished and competed at Nalanda and now we can add to them the insights of modern science. I'm convinced the recent collaboration between our scholars and scientists will enhance the contribution we can make to the benefit of humanity."