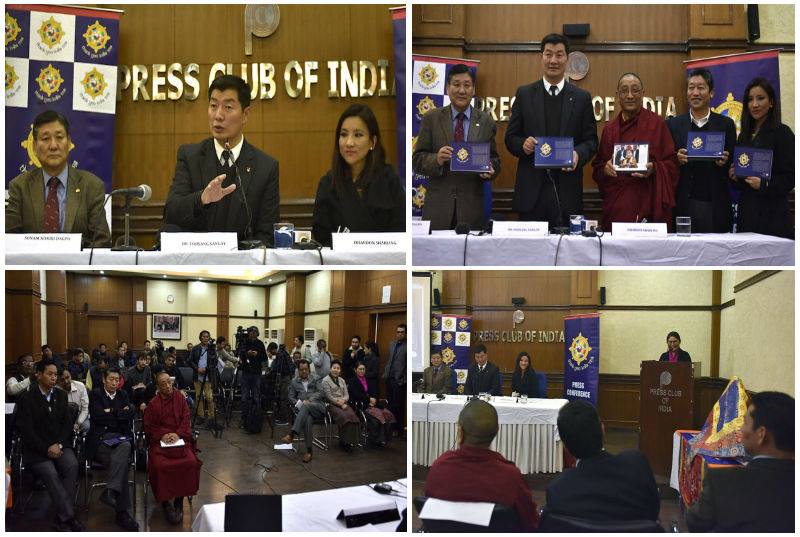 Dharamshala — The Tibetan government has launched a year long Thank You India campaign, which was announced during a press conference in New Delhi, India by President Dr Lobsang Sangay.

Joined by Secretaries Sonam Norbu Dagpo and Tenzin Dhardon Sharling of the Department of Information and International Relations (DIIR), the President recalled that March 31, 2018 will mark 60 years since His Holiness the Dalai Lama stepped foot on Indian soil. His Holiness the Dalai Lama entered India on March 31, 1959 through Arunachal Pradesh followed by 80,000 Tibetans.

“It also marks 60 years of Tibet under China which is the sad and tragic chapter of Tibet’s history. However, the last sixty years of Tibetan community in exile has been a story of success,” President Dr Sangay said.

“The success of the Tibetan people, also referred to as the most successful refugee community in the world, is due to the support of the international community particularly India and its people."

????or this reason, the CTA is orgainising a series of events to mark 2018 as thank you year. It is a gesture of our gratitude to India for the support and encouragement that have enabled exile Tibetan community under the leadership of His Holiness the Dalai Lama to survive as a productive and cohesive community outside Tibet,” he announced.

“His Holiness the Dalai Lama calls himself as a ‘son of India’ because His Holiness has survived on the nutritious Indian dal and roti for the better part of the last sixty years, and also because his mind is filled with the rich knowledge of ancient India,” he said.

President Sangay also reiterated the link between Tibet and India, as the Tibetan movement follows Ahimsa, the Gandhian principle of non-violence, and how Tibetan democracy is also emulated from the Indian system of democracy.

????hina has destroyed almost 95% of Tibetan monasteries and nunneries. However, under the visionary guidance of His Holiness and the support of Indian government, Tibetan Buddhism is thriving now,” he said.

“Not just in Tibetan community, Tibetan Buddhism is now also thriving in the Himalayan belt as a result of His Holiness the Dalai Lama’s efforts. His Holiness now wants to revive this ancient knowledge throughout India,” he explained.

Secretary Sonam Norbu Dagpo also addressed the press conference, saying that Tibetans have been able to preserve and promote its rich culture in exile only with the support of the Indian government and people. Therefore, he said that the Tibetan administration will observe 2018 as year of gratitude with a series of pan-India events spanning 12 months.

“Tibetans will thank India for ensuring the success of the efforts of the Tibetan people: promoting its rich ancient culture and unique identity, assuring the viability and sustainability of the Tibetan leadership and Tibetan communities and leading the Tibetan struggle through steadfast commitment to non violence and dialogue,” he said.