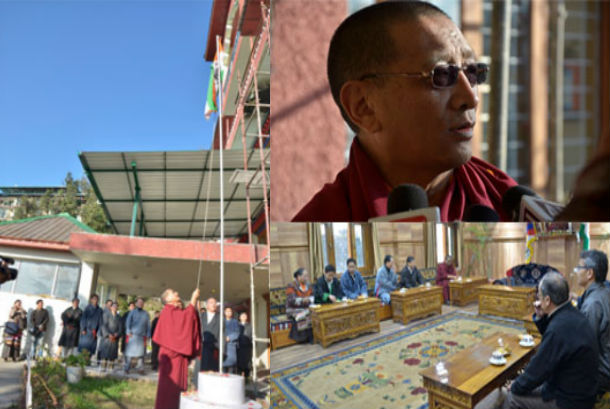 Dharamshala: - The Central Tibetan Administration (CTA) Friday greeted India on the celebration of its 69th Republic day. Kalon Ven Karma Gelek Yuthok, the officiating President of the CTA, hoisted the Indian National flag at a brief ceremony held at the Kashag (cabinet) secretariat, in Dharamshala, India, on January 26, 2018.

President Dr Lobsang Sangay who is on an official visit to three-nation Europe. The brief ceremony was led by the officiating President of the CTA, Kalon Karma Gelek, who said "India has made a great progress over the past 69 years in all the fields and have achieved a great many success. We are also confident that in the future too India will move forward to further heights and progress, and eventually will become a very well known and famous world power. This is our prayer and hope."

"I would like to congratulate and convey the greetings of the Central Tibetan Administration and the Tibetan people to India on this auspicious occasion," Kalon Karma Gelek said, adding: "We Tibetans are extremely grateful to the people and government of India as a whole for their generous support for all these years. We will try to repay this great support in the future by fulfilling the wishes of the Indian government and people when they gave us asylum. This is our pledge."

Following the ceremony, an official ceremony organised by the local Indian administration of Kangra district held in lower Dharamshala, attended by Ministers and high ranking officials of the CTA, including Kalon Kalon Karma Yeshi and Acharya Yeshi Phuntsok, Deputy Speaker of the Tibetan Parliament.

India celebrates 26 January as the "Republic Day" as the constitution of India came into force on 26 January 1950. The Constitution was passed by the Constituent Assembly of India on 26 November 1949 but was adopted on 26 January 1950 with a democratic government system, completing the country's transition toward becoming an independent republic. India achieved Independence from British rule on 15 August 1947.