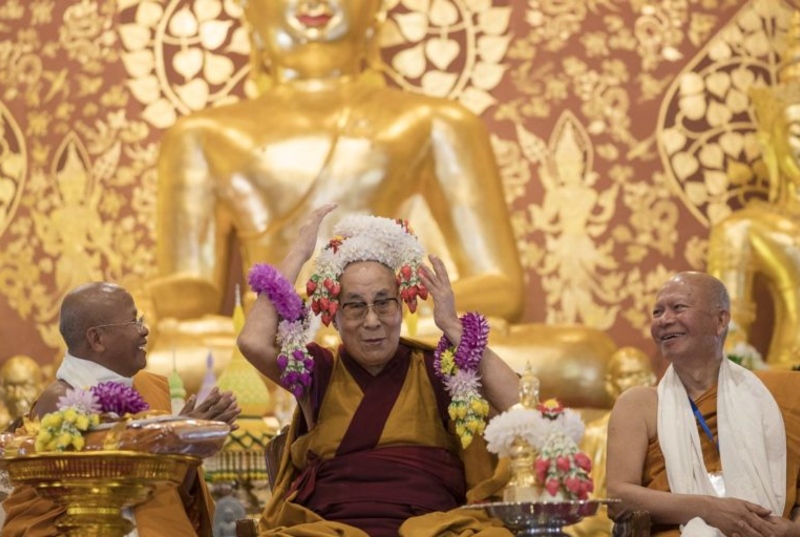 His Holiness the Dalai Lama playfully wearing a garland over his head at the inaugural ceremony of the new Wat Pa Buddhagaya Vanaram Temple, Bodh Gaya, January 25, 2018. Photo: OHHDL

We should engage in research and an exchange of experience. We need closer relations and a common effort to present Buddhism in the 21st century," His Holiness the Dalai Lama suggested at the inauguration of a Thai temple in Bodhgaya, India.

Dharamshala — "We could send young monks again and welcome Thai monks to our monasteries. Tibetans could learn Thai and Thais could learn Tibetan. There are some Buddhist teachings only available in Pali and others only available in the Sanskrit tradition. We should engage in research and an exchange of experience. We need closer relations and a common effort to present Buddhism in the 21st century," His Holiness the Dalai Lama suggested at the inauguration of a Thai temple in Bodhgaya, India.

His Holiness the Dalai Lama continued his time in Bodhgaya, India, as the 82 year old spoke to more than 7,000 local Bihari students before inaugurating a new Thai Buddhist temple on January 25, 2018.

The spiritual leader was invited to address the students by an old friend, Valentino Giacomin, through the Alice Project, an educational foundation set up by the Italian man after receiving inspiration from the Dalai Lama.

After the initial welcoming, His Holiness was requested to release Giacomin’s latest book, Universal Ethics. Giacomin then gave a welcoming speech in which he explained how he had met His Holiness in Dharamsala more than 30 years ago. His Holiness told him then that it would be excellent if he could continue to work with education in India. Consequently, the Alice Project, focused on sustainable education and a culture of peace in an intercultural and interreligious school, was launched in Sarnath in 1994 with branches established later in Bodhgaya and Arunachal Pradesh.

His Holiness then addressed the audience, saying: “It’s a great honor for me to be here and I’m happy to meet so many members of the younger generation, as well as my old friend from Italy who has been trying to fulfill our educational goals.

“Time is always moving on; it never stands still. The past has gone. Only a memory remains, and the future has not yet come, which gives us an opportunity to create a better world. Young people like you represent the future. It rests on your shoulders and in your hands.

????ducation is a key factor because education increases our ability to think and analyse how things come about. Although none of us wants problems we face a host of them, many of which are of our own creation. Our existing modern education is inadequate for ensuring that as individuals, families and communities we are happy. This is something we need to think seriously about. One of the reasons is that our existing education tends to have materialistic goals, whereas for humanity to be happy depends on peace of mind. We have to give serious thought to how to incorporate inner values into our education on a secular basis.

“These days I am committed to trying to revive ancient Indian knowledge about the workings of the mind and emotions. We need to understand better how to tackle our negative emotions through reason and analysis from a strictly secular point of view.

“You young students shouldn’t just accept what you’re taught. You should think about it, analyse it, examine the reasons behind it, and compare it to other points of view. This was the spirit of Nalanda, the great University that flourished in Bihar. Think about how everything is dependent on other factors.

????s I said, the future is in your hands. You young people have the opportunity to make a better world, but you’ll have to make an effort. I may not live to see it, but if you make the attempt, in 20 to 30 years the world could become a much more peaceful place. Education is one factor, but within that we need to pay more attention to tackling our disturbing emotions. This will entail adopting a sense of emotional hygiene corresponding to the hygiene with which we protect our physical health.”

Leaving the Kalachakra Maiden, His Holiness made his way to the Thai Bharat Society’s Wat Pa Buddhagaya Vanaram Temple, where he was received by Phra Bhodhinandhamunee and Dr. Ratneswar Chakma.

Dr. Ratneswar Chakma and Phra Bhodhinandhamunee welcomed His Holiness, describing the leader as a model of compassion.

His Holiness began by acknowledging that historically the Pali Tradition derives directly from the Buddha’s first teachings, which make its followers the most senior disciples.

“I have great respect for all our Dharma transmissions, just as I respect both theistic and non-theistic religious traditions, because humanity benefits from them. Today, even scientists are showing interest in what Buddhism has to say about the mind and emotions. The knowledge we’ve kept alive remains relevant because it can help reduce our negative emotions and the power they have over us.

????iscussions I’ve had with scientists have been mutually helpful. One of the few casualties has been my belief in traditional Buddhist cosmology. However, it’s clear to me that the Buddha came to teach the Four Noble Truths not to map or measure the universe. He introduced a realistic approach to suffering, an approach that is also scientific. I’d like to see scholars, scientists and practitioners gather here and sit in a circle to discuss the content of the Tripitaka, the three collections of scriptures.

“In the 70s, some of our monks went to Bangkok where they learned Thai as well as participating in various aspects of practice. They’re old now, but we could send young monks again and welcome Thai monks to our monasteries. Tibetans could learn Thai and Thais could learn Tibetan. There are some Buddhist teachings only available in Pali and others only available in the Sanskrit tradition. We should engage in research and an exchange of experience. We need closer relations and a common effort to present Buddhism in the 21st century.

“The essence of Buddhism is compassion or karuna. Since the world needs more compassion we should look into how we Buddhists can contribute to it. It’s not a question of converting others to Buddhism, but of seeing how we can contribute to human peace of mind, by, for example, showing how to tackle our negative emotions. That would really benefit humanity.”

The inauguration of the new temple ended in a lunch which offered a choice of delicious Thai and Indian food.