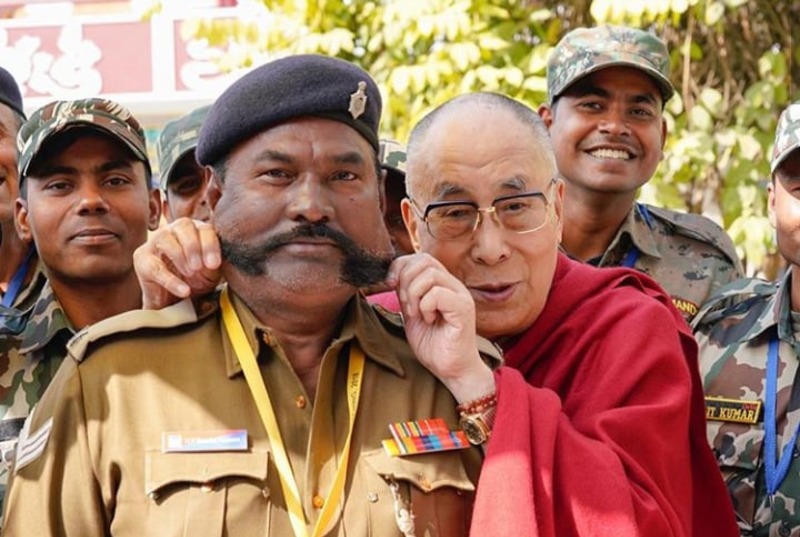 HHDL playfully posing for photos with members of the security team that helped during his four week visit to Bodhgaya, Bihar, India on January 28, 2018. Photo: OHHDL

Dharamshala — Tibetan spiritual leader and 82 year old Nobel Laureate His Holiness the Dalai Lama arrived in Delhi on January 28 for routine medical check-ups after a month of teachings in Bodhgaya, in northeastern India.

“This morning as people thronged the Bodhgaya streets to see him off, His Holiness the Dalai Lama first visited the Mahabodhi Stupa to pay his respects before the image of Buddha in the main chapel and at the Seat of Enlightenment. He then drove to Gaya airport to fly to Delhi, where he will undergo routine medical tests before returning to Dharamsala on 1st February.” said the report in the official website of OHHDL on Sunday.

His Holiness the Dalai Lama granted special audience to many members of the local Indian administration and their families on Saturday according to the report. His Holiness also received and congratulated Kathok Getse Rinpoche, newly elected Head of the Nyingma Tradition and they even had tea together.

The Tibetan spiritual leader His Holiness the Dalai Lama is scheduled to give a short teaching from the Jataka Tales in the morning at the Main Tibetan Temple in Dharamshala on March 2.