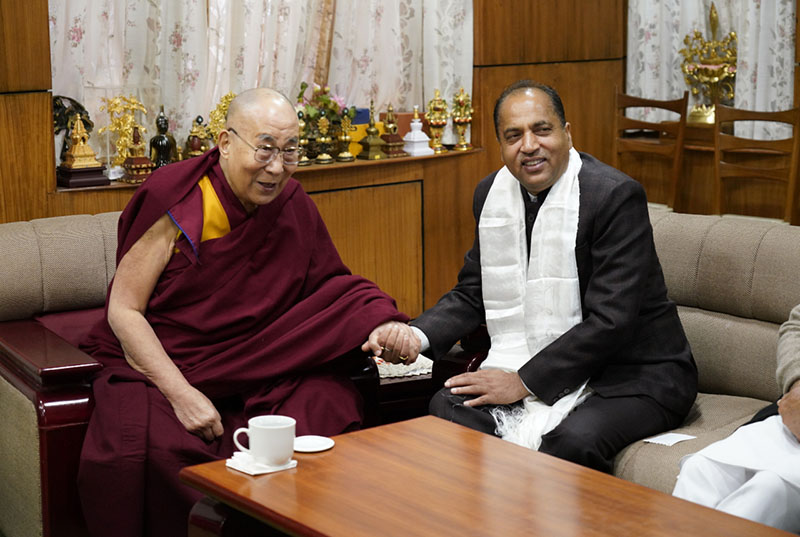 Chief Minister of Himachal Pradesh Jai Ram Thakur and His Holiness the Dalai Lama during their meeting at His Holiness's office in Dharamsala, HP, India on February 1, 2018. Photo: OHHDL

Dharamshala, India — The spiritual leader of Tibet, His Holiness the Dalai Lama has called on Jai Ram Thakur, new Chief Minister of Himachal Pradesh to take a leading role in promoting Indian traditional knowledge through the education system.

At the meeting in Dharamshala, HP, India on February 1, 2018, His Holiness advised the 13th HP Chief Minister to be open-minded while carrying out his political duties. His Holiness also highlighted on ancient Indian traditional knowledge and its contemporary relevance. HP CM was advised to take a leading role in promoting Indian traditional knowledge through the education system.

His Holiness returned to his abode on January 31, 2018 after a month-and-a-half sojourn to Bodh Gaya in Bihar where His Holiness gave a series of sermons and presided over the initiation ceremony of over 50,000 devotees from more than 13 countries.

The spiritual leader has cancelled most of his overseas obligations in the new year, including an upcoming visit to United States. His Secretary Tenzin Taklha expressed his regrets in a letter to the Raleigh mayor Nancy McFarlane saying, “It is with deep regret that I inform you of a change in His Holiness the Dalai Lama’s schedule, obliging him to cancel the majority of his travels abroad, including the United States of America.

While there is no medical reason for the cancellation, His Holiness stated late in 2017 that he was unable to recover as quickly from the long flights as when he was younger. His Holiness will be 83 in July. In August of last year, the leader cancelled his trip to Botswana, Africa citing exhaustion and his physician’s advice not to undertake long journeys.

His Holiness the Dalai Lama also has recently appointed his personal representatives or emissaries to attend international engagements or speak on his behalf indefinitely. Citing increasing physical fatigue, His Holiness made the comments while meeting with a group of international youth leaders brought to Dharamshala, India, by the Washington-based Institute of Peace.

Introducing Prof Samdhong Rinpoche and President Dr Lobsang Sangay as his trusted personal representatives or emissaries, His Holiness has urged the United States Institute of Peace to hold more effective meetings in the future, to pave the path for a peaceful, compassionate century.

“I'm 82 years old, and since last year my feeling of tiredness has been much increased,” he told the group during meetings in November 2017. Because he may not be able to maintain a regular international travel schedule, His Holiness said, the president of Tibet's current government-in-exile, Dr Sangay, along with prominent Buddhist scholar and former prime minister in exile, Samdong Rinpoche, would act as his official emissaries or representatives.

His Holiness told the international youth leaders that his two fully trusted representatives can participate as his representative or personal emissaries in future dialogue with the United States Institute of Peace. "I am now 82-year old. Since last year, my feeling of tiredness has been much increased. For more activities in different continents and different countries, I may not participate," His Holiness said, adding: "So I brought two of my trusted friends and emissaries."

These "trusted friends, they know my thinking," he said. “Our work, continuously, should be more active [and internationally engaged], so in these two persons," he said, pointing to Dr Lobsang and Prof Samdhong Rinpoche, "I have full trust."