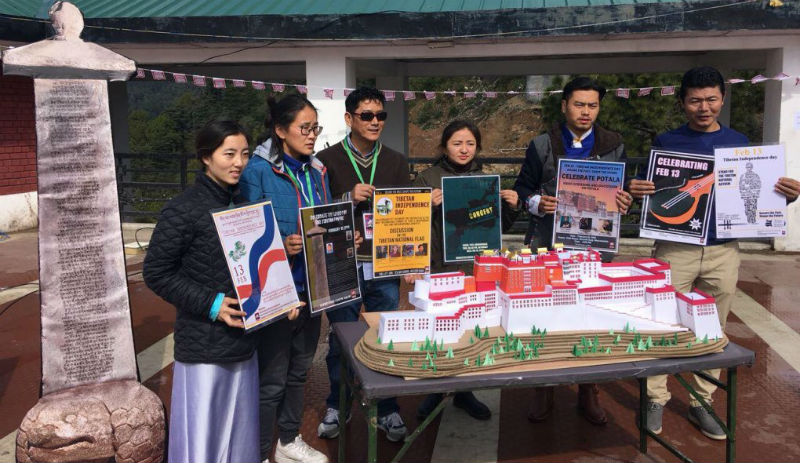 In Dharamsala, home of the world’s largest community of Tibetans living in exile, events included a day-long exhibition and an evening concert, which took place near Tsuglakhang, the Dalai Lama's temple, on 13th February 201.

In one of the pictures, Tibetans stand behind a stall with a replica of the Potala Palace, historic residence of the Dalai Lama. Next to them stands a replica of the stone pillar engraved with the Sino-Tibetan Treaty 821/823 which stands outside the Jokhang Temple. Both the Potala Palace and Jokhang Temple are located in the Tibetan capital, Lhasa. Another picture shows Tibetans standing inside a large, illuminated map of their occupied homeland.

Tibetan Independence Day is celebrated every year on 13 February, the anniversary of the five-point proclamation issued by the 13th Dalai Lama in 1913.

In a reverse from the present, the five-point statement was issued while Tibet was independent. It was therefore not, as some describe it, a declaration of independence, but rather a reassertion or reminder of Tibet's status, acccompanied by some of the obligations of its citizens. This is captured in the beginning of the fourth point, which describes how Tibetans will have to defend their country and its independence against possible future invasion:

“Tibet is a country with rich natural resources; but it is not scientifically advanced like other lands. We are a small, religious, and independent nation. To keep up with the rest of the world, we must defend our country...To safeguard and maintain the independence of our country, one and all should voluntarily work hard.”

Students for a Free Tibet have organised Independence Day celebrations since 2013, the 100thanniversary of the five-point statement. This year’s theme is "stand for the Tibetan national anthem".