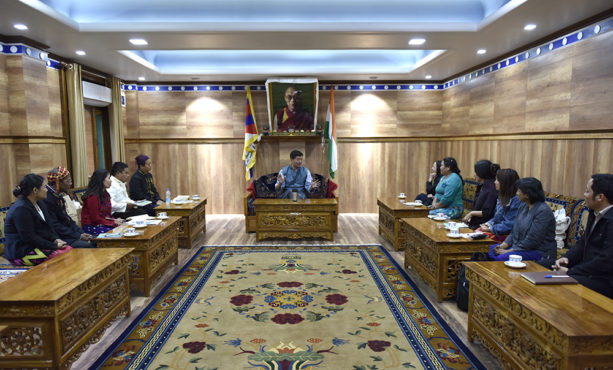 President interacting with the visiting delegation from Kachin, Myanmar, in Dharamshala, India, on April 18, 2018. Photo: CTA

During the meeting on Tuesday, President of Central Tibetan Administration (CTA), Dr Lobsang Sangay explained the democratic structure of the Tibetan administration and the functions of the various departments, autonomous bodies and offices of the CTA.

According to the CTA official media, the President also apprised them of the critical situation inside Tibet and the importance of preserving the unique Tibetan language and culture to safeguard Tibetan identity.

Speaker then informed them of the generosity of the Indian government and the efforts and perseverance of His Holiness the Dalai Lama as well as those 80,000 Tibetans who had fled along with him into exile, that numerous Tibetan monasteries, schools and settlements had been set-up, reviving and preserving the culture and tradition which is being destroyed inside Tibet relentlessly.

He added that even Tibetan Buddhism is garnering lots of attention on the global platform. He also informed them of the significance of Tibet environmentally, whose destruction can have detrimental ecological effect in various countries of Asia. Citing the 152 self-immolations inside Tibet, the Speaker of the Tibetan Parliament-in-Exile stated that Tibet is not just a political issue but also an issue of basic human rights.

The delegation led by Mr Gum Sha Aung has earlier also visited the various non-governmental organisations and institutes based in Dharamshala.