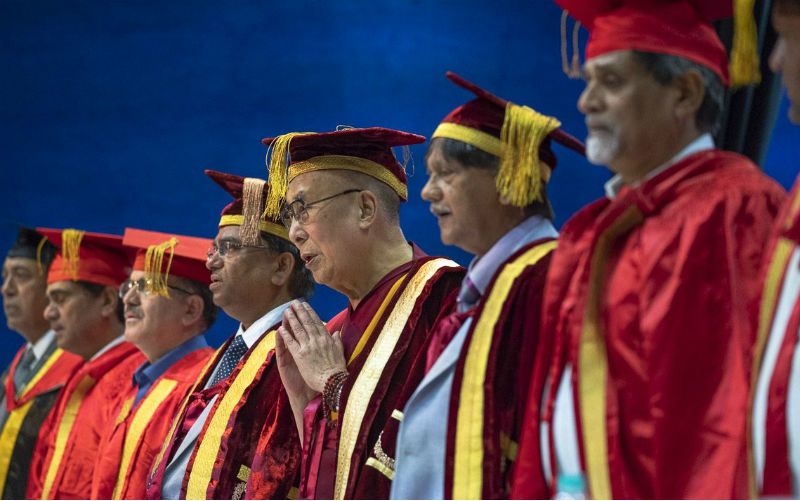 Participants on the dias standing during the Indian National Anthem as of the Lal Bahadur Shastri Institute of Management Convocation comes to an end in Delhi, India on April 23, 2018. Photo by Tenzin Choejor

New Delhi, India — The spiritual leader of Tibet, His Holiness the Dalai Lama welcomed the proposed visit of Indian Prime Minister Narendra Modi to China and said the two countries together can make huge contributions in different fields.

"I think very good....neither India nor China...has the ability to destroy each other,His Holiness the Dalai Lama told reporters on the sidelines of an event when asked about the visit.

The Nobel Peace Prize laureate said that the two countries should live as friendly neighbours. "We have to live side by side, then much better live friendly. If combined, India and China, can make contribution in many fields besides economy," the Tibetan spiritual leader said.

The spiritual leader of Tibet had on Sunday said that Tibet might remain part of China if its geographical, cultural and linguistic autonomy was guaranteed. "Tibet will benefit from economy of China."

Without seeking independence for Tibet, the Central Tibetan Administration seeks genuine autonomy for the Tibetan people within the scope of the Constitution of the PRC through Middle Way Approach.

This will be the fourth visit of Modi to China after he came to power in 2014. He is again due to visit China to take part in the SCO Summit to be held at Qingdao city on 9 to 10 June.

The Modi-Xi summit meeting is taking place in the backdrop of a series of high-level interactions between both the two countries starting with Chinese foreign minister Wang's visit to India in December, the first after the Doka La border standoff.

It was followed by two meetings between Indian national security advisor Ajit Doval and his Chinese counterpart Yang Jiechi and the visit early this year by India's Foreign Secretary Vijay Gokhale to Beijing. .