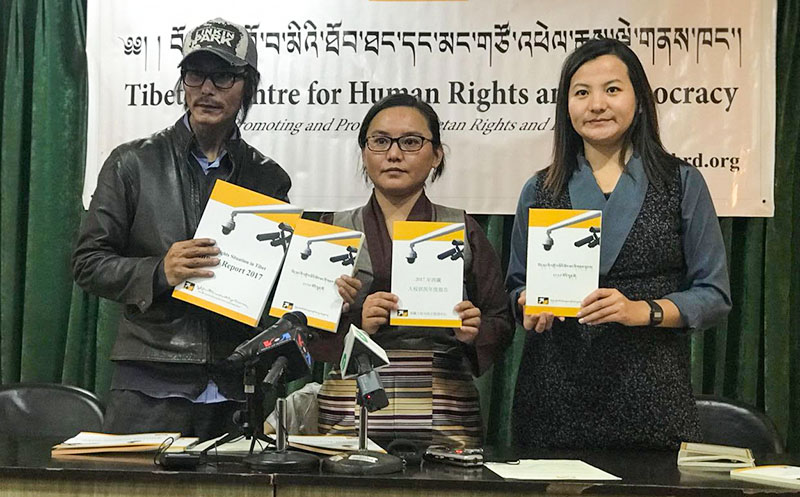 TCRD researcher Pema Gyal (L), Director Tsering Tsomo and researcher Tenzin Dawa (R) at the launch of the annual report during a press conference in Dharamshala, India, on May 7, 2018. Photo: TPI

Dharamshala, India — The Tibetan Centre for Human Rights and Democracy (TCHRD) has said that "China has intensified and strengthened its surveillance program through out Tibet, sending thousands of cadres into nomadic communities to keep an eye on the Tibetans inside Tibet."
The India based Tibetan rights group released its annual report on human rights situation in Tibet at a press conference held at the conference hall of the Library of Tibetan Works and Archives (LTWA) in Dharamshala, India on May 7, 2018.
The 2017 Annual Report on the human rights situation in Tibet presents an analysis of major human rights abuses committed by Chinese government authorities in 2017 and provides specific recommendations to the government of the People’s Republic of China (PRC) on ending repressive policies and practices in Tibet, the group said in a statement.
Key areas of concern the report highlights are mass surveillance and its repercussions on right to privacy and freedom of expression and opinion; right to freedom of religion and belief; arbitrary detention and torture; and development policy with special focus on poverty alleviation programs.
“New repressive laws, regulations and policies backed by advanced technology were implemented to preempt and suppress peaceful political dissent and government criticism. Throughout the oppressive surveillance state, Tibetans continued to protest and self-immolate in order to draw attention to crimes against humanity and other human rights violations perpetrated by Chinese authorities in Tibet.
“Arbitrary and arrests and detention persisted and torture remained rampant in pre-trial detention where detainees are frequently forced into false confessions. Several cases of torture uncovered this year contribute to the overwhelming testimonial evidence of the inhuman Chinese justice system. The common use of enforced disappearance guarantees full discretion to law enforcement agencies to subject detainees to torture and deny them the right to legal representation and fair trial,” the group further said.
Tightening control over religious institutions, the group added, indicates that the raft of monastery management measures implemented in the past five years would become a permanent feature. “This would further contribute towards the securitization of Tibetan religious and cultural issues resulting in increased religious freedom violations.”