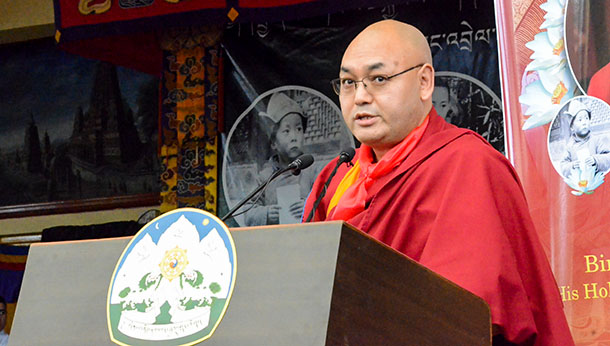 Speaker of the Tibetan parliament-in-exile, Khenpo Sonam Tenphel, gave solemn obeisance to His Holiness the Dalai Lama while delivering his statement on his 83rd birthday. He joined thousands of Tibetan and well wisher at the main Tibetan temple in Dharamshala, India on Friday to celebrate the occasion.

He said “On this 23rd day of the 5th month in the Earth-Dog Tibetan Royal Year 2145 in the 17th Tibetan Royal Sexantry, which corresponds to the 6th day of July 2018, we offer our prostrations to His Holiness the 14th Dalai Lama, the supreme protector-patron of all beings…. I, on behalf of the Tibetan Parliament-in-Exile, offer my greetings and good wishes with a feeling of faith, reverence, and joy”.

While praising his noble deeds that flourish all across the globe, the Speaker explained, he said: “Since his physical birth on this earth at that time like the haloed appearance of the sun, His Holiness the Dalai Lama has now, by Tibetan tradition, attained 84 years of age, and by the outside universal calendar 83 years of age. And on this auspicious day of a hundred-thousand counts of joy marking the momentous occasion of his birth, when people in all corners of the world devote themselves to merit-accumulating positive deeds, bubbling with feelings of gladness, I on behalf of all Tibetans in Tibet and in exile, offer ardent entreaty and solemn prayers that His Holiness the Dalai Lama continues his noble deeds that flourish all across the globe.

“In countries and regions across the world on this day, Tibetans and peoples who covet peace are expressing their gratitude to His Holiness the Dalai Lama for his universally known and devoted three commitments, his promotion of the ancient Indian cultural traditions and other universally acclaimed deeds and his provisions of guidance to them, by means of observing his birthday with a sense of joy, devotion and contentment. It goes to the very essence of marking the birthday of His Holiness the Dalai Lama that for all these reasons we should reiterate our pledge to devote ourselves to conduct our lives in such a way as to seek to become Tibetans endowed with a sense of ethics and caring towards others”.

The Parliament statement also emphasizes His Holiness' tireless efforts to resolve Tibet issue through non-violent methods, collectively—as mutually beneficial to both the Tibetan and Chinese. “Over the past multitude of decades, His Holiness the Dalai Lama has especially devoted himself immensely to the well-being of all sentient beings on this earth in general, especially to the followers of the different religious traditions without any distinction regarding their doctrines and belief systems and particularly for the benefit of all Tibetans of the Snowland of Tibet, whether living in Tibet or in exile through his deeds of great magnitude. In particular, in order to ensure the sustenance and rekindling of the Tibetan people’s struggle for their just cause, His Holiness the Dalai Lama initiated and guided the entirety of the exile Tibetan set up to the path of democracy."

"In specific terms, in order to reach a settlement on the basic issue of Tibet, His Holiness, in 1987, put forward a Five-Point Peace Plan in the Congress of the United States of America. Thereafter, in 1988, he presented his peace proposal to China on the Tibet issue at the European Parliament in Strasbourg. Likewise, he met and held discussions on successive occasions with a large number of political leaders and influential figures on the world stage, taking up with them, issues of such great importance as the natural environment of Tibet, the situation in Tibet under the Chinese rule and with regard to the Tibetan administrative set up in exile. These have resulted in governments as well as private entities and societies at large, of many countries in the East and West, and elsewhere too, showing concern and interest on the just cause of the Tibetan people on an unprecedented scale”, the statement added.

However the repressive policies toward people of Tibet continue to worsen despite nearly six decades of persecution. “Even to this day, the government of China remains adamant in refusing to make any positive change in its policy towards the issue of Tibet” with a deep sighed he continued “take the case, for example, of what happened in the Chamdo region of what is called the Tibet Autonomous Region during the religious festive month of Saka Dawa recently. A coercive order was issued banning all the school-going Tibetan children and their parents from visiting temples to offer worship and receive blessings and taking part in any sort of religious gathering. This alone makes obvious the extent of the coercion employed by the government of China in preventing the Tibetan people from exercising their religious freedom.

“The government of China in January 2016 arrested Tibetan language rights activist Tashi Wangchuk and put him on trial before what is described as the Yulshul Intermediate People’s Court in Yulshul Prefecture of Qinghai Province in January this year. And on the 22nd of May this year, he was sentenced to five years of imprisonment for supposedly having committed the crime of inciting separatism. But the Human Rights Council of the United Nations, the Subcommittee on Human Rights of the European Parliament, the State Department of the United States, and many others have strongly criticized the Chinese government’s action, saying that the trial proceedings and the decision were grossly unfair and trampled on fundamental rights of citizens. And they made emphatic calls for the immediate release of Tashi Wangchuk from prison”.

The statement strongly criticized the totalitarian state under Xi Jinping's rule while highlighting the worsening human rights violations in Tibet. “The situation concerning human rights in Chinese-ruled Tibet has been deteriorating tremendously on a daily basis. Tibetans continue to be subjected to arbitrary arrests and detentions. They continue to be tried and sentenced in arbitrary manners to jail terms on charges based on political considerations. There is no freedom of speech and expression. Likewise, health and medical facilities are poor and minimal. The Chinese government’s policy in Tibet is designedly discriminatory, favouring those who are ethnically Chinese and prejudiced against those who are ethnically Tibetan”.

Reacting to China's actions in Tibet– posing a great threat to the fragile ecological balance of the Tibetan plateau, the Speaker said: “…situation concerning the natural environment of the Tibetan Plateau too has been deteriorating markedly. In the area known as Lhuntse Dzong in Lhokha prefecture of Tibet, China has been carrying out the project to extract and take away precious minerals such as gold and copper, estimated to be worth about US $ 60 billion. It has also announced plans to begin building three new civil airports in Lhokha, Shigatse and Ngari regions of Tibet in 2019. These regions are incidentally close to the borders of the neighbouring countries of India, Bhutan and Nepal. In addition, there is a plan to build a railway line running from Chinese-ruled Tibet to the capital city of Nepal. All these projects represent serious security threats to these neighbouring countries too”.

"However, on account of His Holiness the Dalai Lama’s advanced age, for the reason that this is the year before his next obstacle year and that the next year will be his actual obstacle year, it is pertinent for all the people of the Snowland of Tibet to strongly devote themselves unitedly to carry out merit-accumulating activities for the sake of his physical well-being. The main thing, however, is that there should be fraternal good relationship among the Tibetan people, whose sense of unity should be like the singularity of a sharp-edged chisel," he added.

The Speaker further said: "All Tibetans, both in the government and in the private domain, should nurture and promote as much as they can, the religious traditions, the cultural heritage, and the spoken and written Tibetan language, of which they are the custodian. If they manage to do that, then it may also come for us to wish to make such grand religious offerings as to gladden His Holiness the Dalai Lama’s heart, including with a long-life prayer offering in all solemnity, in which case we emphatically call on all Tibetans to act with cooperative unity to make a common effort with even greater amount of diligence than ever before".

Responding to the recent visit of a delegation from the so-called Tibet Autonomous Region took to Canada and US, the Speaker has dismissed their claims on Tibet saying they have systematically regurgitated propaganda that China has routinely been churning out. "On the 9th of May this year, a delegation of the National People’s Congress, the Chinese Parliament, from the so-called Tibet Autonomous Region took part in a hearing conducted by the Canadian Parliament’s Standing Committee on Foreign Affairs and International Development in order to publicize their claims about the situation there."

"But contrary to what the real situation in Tibet was, the delegation only regurgitated the propaganda that the government of China has routinely been churning out. Nevertheless, members of the committee grilled the delegation members with pointed questions on issues such as the status of the Sino-Tibetan dialogue; the situation concerning the condition and whereabouts of the 11th Panchen Lama, Gedhun Choekyi Nyima; on the imprisonment of the Tibetan language rights activist Tashi Wangchuk; and on other related matters."

"Likewise, the Standing Committee on Foreign Affairs and International Development of the Canadian Parliament on June 12 granted a great opportunity of a hearing on the urgency of the current situation in Tibet. On that occasion, President of the Central Tibetan Administration and a delegation from Tibetan Parliament-in-Exile took part in the hearing to avail the good opportunity and presented their testimonies on the actual situation in Tibet with presentations of substantive evidence to fully back their statements," he added.

In conclusion the Tibetan Parliament said “sixty years are in the process of elapsing since the Tibetan people first arrived in exile. During that period, both the government and people of India have been the most generous in extending to us the requisite assistance, patronage and friendship of great magnitudes. With the sense of rectitude to feel gratitude for them at all times, we offer our utmost thanks to both the government and people of India. Likewise, to all the governments as well as peoples and organizations in the private domain all across the world, who have extended support on the issue of Tibet and provided assistance and help to the Tibetan people, we take this opportunity provided by the present momentous occasion to express our gratitude”.